The Hierarchy of the 1,200-Year-Long Roman Empire

Plebs and patricians were just some of the people who made up the Roman Hierarchy. 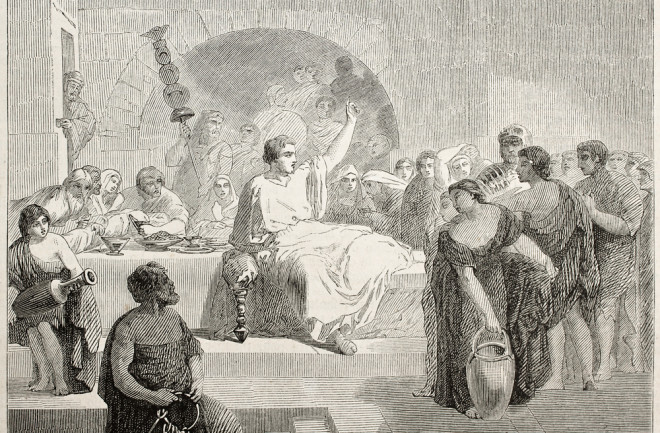 It all started with one city during the eighth century B.C. that would go on to be an empire. Ancient people living in villages near Rome drained the marshes, constructed stone buildings and established marketplaces. For about the next 1,200 years, the city government expanded control to the nearby areas, then the Italian peninsula and the rest of the Mediterranean.

At its peak, the Roman Empire spread through more than 50 modern-day countries ranging from England in the northwest to Iraq in the far east. An estimated 100 million people lived in these countries, spoke different languages and had distinct cultures.

It's difficult for scholars to fully understand life for all these inhabitants in this vast land. But they can agree on one aspect — life in the Roman Empire was hierarchical. Status determined all aspects of a person's life, and the best privileges were reserved for Rome's ruling class.

Battling at the Bottom

Hierarchy was a fixture of life in the Roman Empire, appearing in all aspects of life, from military service to household relations. At the top were the The patricians and the plebeians (plebs). They weren't the "have-nots" of the Empire — that misfortune was reserved for many others.

Different statuses were given to foreign residents who lived in the Empire, freed people who were once enslaved and people still in bondage.

Enslaved people were at the bottom of the social hierarchy. They had no rights, and their enslavers could work, abuse and sell them as they pleased. Estimates have put the enslaved population around 10 percent during some points in time but as high as 30 percent during other eras.

Historians have long debated and even calculated how the enslaved population persisted for more than a thousand years. Early in the Republic, enslaved people were likely prisoners of war or people who were captured and trafficked. They came from all over Europe, including the British Isles and Northern Europe. They also came from other parts of the Mediterranean, like North Africa and the Middle East. Children born into slavery were kept in bondage for life, and as the Empire grew, they were likely a significant reason the enslaved population grew.

Enslaved people, however, were worked to death by their enslavers, and a typical child born into slavery only had a life expectancy of 25 years. They toiled in mines, mills and agriculture settings. They were also put to work in households and the most elite families had hundreds of enslaved people. Enslavers despised relinquishing their free labor, and those deemed runaway risks were tattooed or forced to wear a slavery tag that instructed a captor to return the fugitive.

The gaping divisions between enslaved people and Roman citizens made the distinctions citizenship seem minor in comparison. Citizenship was generally divided into two categories — the patricians and the plebes.

The patricians were from families who claimed they descended from the founders in the eighth century B.C. and ranked higher than the plebs. The plebs were Rome's politicians, landowners and citizens.

Scholars, however, don't entirely agree on what benefits patricians had over the plebs. It was long assumed the patricians were the ruling class and the only ones who could hold office. But there are examples of pleb families who had significant political power.

Take Marcus Junius Brutus, for example. Brutus was one of the senators who assassinated Gaius Julius Caesar. Brutus, like most Romans, came from a plebeian, not a patrician family. Yet, he achieved high political positions, befriended Caesar and then betrayed him.

This has led some scholars to argue that patricians had a majority share but not a monopoly over status-determined privileges like political office.

Intermarriage between plebes and patricians was also inconsistent during the Empire. It was often banned but sometimes allowed at different points in time. And although plebes could own land, there were attempts by the patricians to pass laws denying plebs ownership of conquered lands.

The ancient Roman economy depended on slave labor and gave both patricians and plebs the opportunity to pursue wealth and comfort at the expense of others.