The Great Recession and Great Depression in perspective

Calculated Risk has a great chart showing GDP fluctuations which puts into perspective just how big a downtown the Great Depression represented, and how it compares to the current one. For the population ~30 and under the current downswing is already 3 times more extreme from the peak than any recession they have memory of. In fact, we're already approaching the biggest downswing since World War II and the recession will certainly be the longest as well. On the other hand, we're as far from the commonly accepted definition of a Depression of a 10% decline in GDP as the 1991 one recession was from this one, and, we're about an order of magnitude less than the peak-to-trough of 25% GDP that occurred during the Great Depression. Chart below the fold. 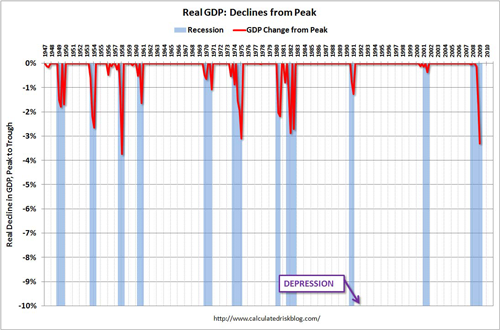