How one aerospace company is preparing for the advent of tourism in outer space. 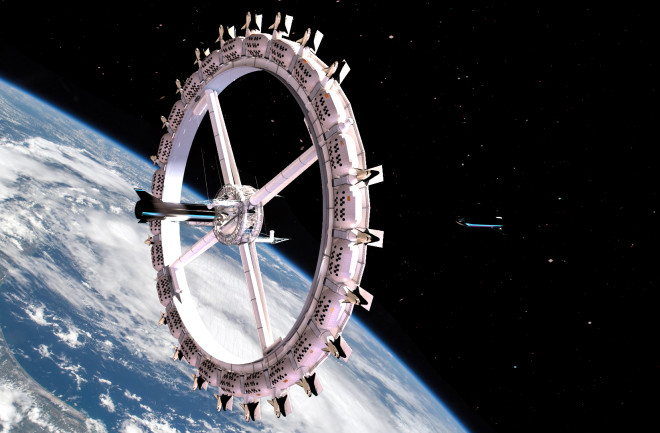 The word vacation conjures many images: pristine beaches, glittering ski slopes, outstretched highways and theme parks. It doesn’t call to mind cosmic journeys upon colossal rotating wheels, or vistas defined by the long arc of Earth’s surface — but it might soon.

Six decades in, the Space Age is marching steadily into its commercial phase, allowing more and more private individuals to purchase passage beyond Earth’s atmosphere. In just the past few months, the billionaires Jeff Bezos and Richard Branson have paid to cross or arrive at the edge of the Kármán line, the boundary between our atmosphere and outer space. Beside a budding clientele of Bezos and Branson stature, the era of full-fledged pleasure trips to space seems at hand, even for a multi-day escape.

To accommodate such a jaunt, the Sacramento start-up Orbital Assembly Corporation (AOC) has announced plans to open a space hotel by 2027. As the first of its kind, Voyager Station is slated to be a luxury resort designed to accommodate 280 guests and 112 crew members, complete with a restaurant, a bar, a concert hall, a gym and even a cinema.

If this sounds preposterous, Tim Alatorre, OAC’s vice president and architect behind the hotel, understands the skepticism. But it won’t be long, he insists, before such talk is commonplace. “I think it’s going to be a normal thing, where your mom went to space, your dad went to space,” he says. “Being an astronaut is not going to be a novel thing anymore, because everyone has done it.”

Right now, though, it remains emphatically novel, the stuff of humankind’s oldest dreams. For hundreds and perhaps thousands of years, Alatorre notes, the idea of traveling to space has captivated our ancestors. Indeed, Voyager’s basic structure draws on a century of theorizing about how to colonize the final frontier.

The concept of the rotating wheel, proposed in the early 1900s as a way to generate artificial gravity, was later popularized in the 1950s by the German rocket scientist Wernher von Braun (Voyager was originally named in his honor). Thanks to the centrifugal force it produces, visitors will be able to move about normally, more or less. Or, as OAC puts it on its website: “We provide gravity.”

At first its gravity level will be similar to the moon’s, about a sixth of Earth’s. That’s roughly a revolution and a half per minute. Alatorre says they hope to spin it up to Mars level (a third of Earth’s gravity), and eventually to replicate the weightiness of our home planet. But with scant research on how humans adapt to artificial gravity, they want to better understand their guests’ physiology before raising the g-force.

Besides, for many, the lunar environment is surely part of the appeal. People with disabilities will face fewer physical barriers, while the able-bodied will find themselves capable of otherworldly athletic feats. Maybe we’ll even see a reprise of Michael Jordan’s 1996 Space Jam role? (Not that the guy needs any help defying gravity.) At the least, Alatorre expects “a lot of really good YouTube videos.”

After blasting off from Earth, guests will arrive at a central, zero-gravity docking hub. From there, elevator shafts will carry them outward to a chain of “habitation modules” arranged around the circumference of the circular station. It’s only there, at the edge of the wheel, that the centrifugal force will be strong enough to keep guests and their surroundings firmly grounded.

Wandering the 24 modules, which come in at 125,000 square feet total, they’ll find all the aforementioned amenities of this resort in the sky. They’ll lift unwieldy weights and practice slam dunks, enjoy live music, taste traditional astro-fare like tang and freeze-dried ice cream alongside world cuisines. Then, of course, there’s the view.

Every earthbound resort touts the beauty of its environs, but Voyager’s will be truly unparalleled. In renderings of the station, as guests mill about a sparse, futuristic interior, they are typically gazing out the windows. Each scene is a variation on the same surreal theme: a fraction of Earth’s gargantuan frame, blue and green and white, curving against the black of an interstellar void.

The Price of Being an Astronaut

On its website, the company urges potential clients to get in on the action: “Be one of the first humans to vacation on a luxury space station. Make history as one of the first humans in history to own real estate in orbit.” As if it were promoting any old property in Aspen or Palm Beach, the site advertises short- and long-term leases for “luxury villas, commercial, retail and industrial space” — pun perhaps intended. They’re already in negotiations with booking agents, Alatorre says.

Who are those potential clients? The going rate for an out-of-this-world jaunt is still exorbitant, after all. Oliver Daemen, for example, paid $28 million for a seat beside Bezos in space, and historically speaking that’s the lower end. For now such travel is the prerogative of the uber-wealthy.

But, Alatorre says, “We want to make this an easy choice. If you want to go to Paris for a week or you want to go to space for a week, we want it to be a question of preference, not of money.” Though he wouldn’t discuss prices in detail, he says the goal is for a stay on Voyager to rival a cruise ticket.

Relatively speaking, he says, “the resort is cheap, it’s the flight that’s expensive.” And with the development of more efficient launching systems — like the Starship rocket and Super Heavy booster from Elon Musk’s aerospace manufacturer, SpaceX — the cost of every pound flown into orbit will decline. In industry parlance, transportation won’t be quite so “mass-constrained.” Alatorre goes so far as to suggest the hotel could be significantly more accessible within a decade.

If a project of this magnitude seems ambitious, well, it is. SpaceX, which does not yet have any ties to AOC, gave the startup a shoutout on Instagram in March, ending on a note of uncertainty. “Maybe @spacex can offer a two way ticket by the time it’s finished?” the post reads, referencing Voyager. “We are curious to see if this plan will become a reality or not.”

Alatorre admits that partners and investors are, rightfully, wary. But on the other hand, all signs point to the rapid growth of space commerce. OAC isn’t the only player in the game anymore; as the 23-year-old International Space Station (ISS) — the most plausible tourism venue currently in orbit — nears the end of its life, several companies hope to fill its absence with their own ventures.

Axiom already has a contract with NASA to attach a “destination module” to the ISS, which will eventually be combined with other modules into an independent commercial station. Just last month, Sierra Space and Blue Origin, the aerospace arm of the Bezos empire, announced plans for Orbital Reef, a mixed-use station to be launched by the end of the decade. Voyager, however, is the only one billed primarily as a tourism opportunity.

Above all, Alatorre says, he’s confident in the theoretical and mechanical soundness of the space hotel. OAC has completed architectural work for the “Gravity Ring,” a miniature of the wheel design, as well as “Pioneer stations” with just a few habitation modules. These prototypes — the latter scheduled for habitability by 2025 — will allow the company to test its technologies before the final assembly of Voyager.

“We are committed to this, and we’ve invested our lives and our fortunes into making this a reality,” Alatorre says. “There’s nothing technologically standing in our way. It's just a question of time and money, and we can overcome those.”