The First Close-Up View of a Black Hole

An Earth-sized telescope will capture the unseeable 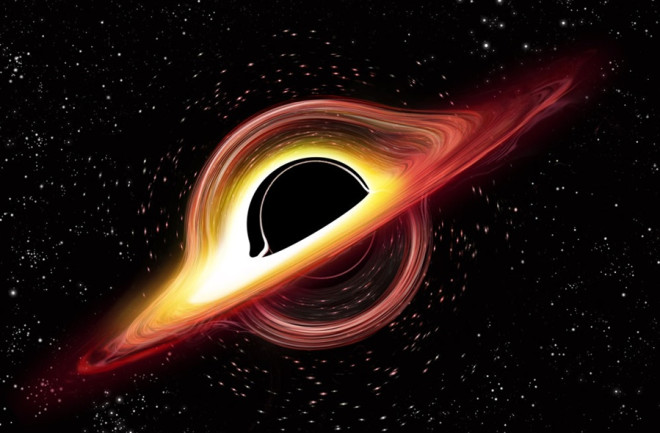 Decades of simulations suggest this is what gas and dust look like spiraling around a black hole. We could soon see the real thing. (Credit: Roen Kelly/Discover)

Astrophysicist Jean-Pierre Luminet didn’t have a supercomputer when he showed the world what a black hole looks like. He just had an IBM 7040 and a bunch of punch cards. He knew from theory that black holes do not emit light. But the material that swirls around them — dust and gas stripped from stars — shines all the way to its inanimate death. Light from that material, Luminet thought, would trace the black hole’s shape, including warps in space-time from its extreme gravity.

When the fridge-sized IBM spit out results in the late ’70s, Luminet used ink and pen to plot out an image by hand. He saw the black hole’s event horizon, the point beyond which nothing can escape; and an accretion disk, the gathering of matter siphoned from nearby stars. Although the black hole had just one disk, gravity had morphed its appearance, like a fun house mirror, into two perpendicular disks. They appeared brighter closer to the black hole, and more luminous on one side than the other.

Some four decades later, the basics of Luminet’s black-hole predictions still stand. But his image and all others are paintings, not photographs. That’s about to change. Scientists working with the Event Horizon Telescope (EHT) will soon release an actual portrait of Sagittarius A* (pronounced “A-star”), the supermassive black hole at the center of our galaxy. As a backup, they have data on another one in a nearby galaxy called M87. The image could help demystify one of the universe’s most mysterious objects, and even help explain how galaxies like the Milky Way form and evolve.

The EHT isn’t just one telescope: It’s a network of eight radio telescopes in Hawaii, Arizona, Spain, Mexico, Chile and Antarctica. Astronomers align these instruments to study the same object at the same time. The scientists then combine data from these eight antennas into one image that looks like it came from a telescope as big as the biggest distance between the telescopes. In other words, they create a virtual telescope the size of Earth.

It’s called very long baseline interferometry, or VLBI. But there’s a trick to it. According to Shep Doeleman, director of the EHT, “the secret sauce to VLBI, the thing that makes it work, is that at each of the telescopes that participates in our observations, we have placed an atomic clock.”

As each telescope stares at Sagittarius A*, the data gets stamped with the atomic time, like it’s clocking out of a shift. Then, scientists line up each bit taken at, say, 5:13 p.m. GMT, with all the other 5:13 p.m. GMT bits.

To do that alignment, though, the clocked-out bits must meet in person, at a central facility. Researchers usually share their data online, but this job, with its many petabytes, is too big for the internet. “The only way to get [the data] anywhere is by flying hard disks around,” says Doeleman. Researchers call this the “sneakernet,” and it’s the ultimate analog-digital mash-up.

The team did its first real observing run in April 2017 with the Atacama Large Millimeter-submillimeter Array (ALMA) in Chile. It’s a weapon powerful enough to let EHT peer right into a puncture in space-time. Wielding that secret weapon wasn’t simple. The astronomers had to combine data from ALMA’s 66 dishes into a single recording before they combined it with the other telescopes’ observations.

Still, even with ALMA, and nearly a year of analysis time, they haven’t made a picture yet. And it’s the fault of a whole continent: Antarctica and its South Pole Telescope. Astronomers had to wait for southern spring before they could fly the pallet of data out. It arrived for processing at MIT’s Haystack Observatory in December.

Why is a black hole snapshot worth all this effort? To Doeleman, it’s about the strangeness of the science. “These are really the most mysterious objects in the universe,” he says. “There’s nothing that comes close, except maybe life itself.”

And life itself, at least life as we know it, doesn’t know what black holes look like, what happens within them, what that means for how galaxies form and evolve, or how that birth and growth led, at least on Earth, to life that can look out and learn how its galaxy works.

“There are very few topics where we say we just really have no idea what happens at that point in the universe,” says Doeleman. “One of those may be consciousness. And another one is the black hole.”

[This post originally appeared in print as "Black Hole Close-Up."]