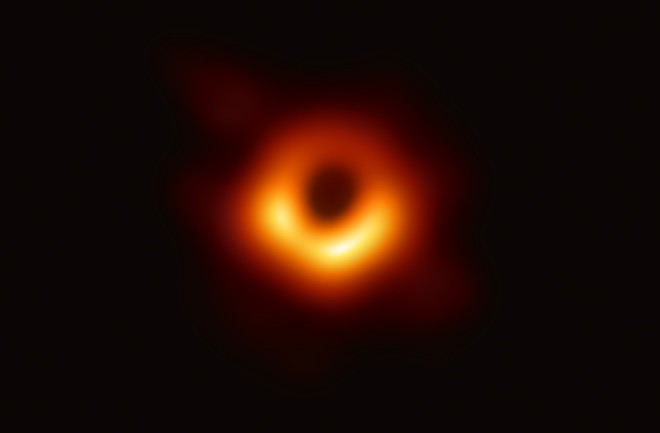 The first ever image of a black hole shows the supermassive black hole at the heart of galaxy M87. (Credit: Event Horizon Telescope)

On Wednesday, astronomers revealed the first image ever taken of a black hole, bringing a dramatic conclusion to a decades-long effort. The iconic image offers humanity its first glimpse at the gas and debris that swirl around its event horizon, the point beyond which material disappears forever.

A favorite object of science fiction has finally been made real on screen. Their target was a nearby galaxy dubbed M87 and its supermassive black hole, which packs the mass of six and half billion suns. Despite its size, the black hole is so far from Earth – 53 million light-years – that capturing the image took a telescope the size of the planet.

This monumental accomplishment was only possible thanks to the Event Horizon Telescope (EHT). The image data was taken back in 2017 but scientists have spent two years piecing it together. That’s because EHT is made of up eight independent observatories that are scattered across the globe, cooperating together to act as one enormous detector.

Shep Doeleman, director of the EHT, announced at today's press event, “We are delighted to report to you today that we have seen what we thought was unseeable.”

Researchers made their grand announcement simultaneously in seven different countries this morning, accompanied by a series of scientific papers published at the same time in The Astrophysical Journal Letters.

Black holes are so massive and dense, not even light can escape their pull. They’re often referred to as a singularity, or a point source, because they take up zero actual space. But this mysterious singularity is surrounded by the sphere of its event horizon. And anything that travels past it is doomed to fall into the black hole, with no hope of escape.

That means the black hole itself is literally dark – it neither reflects nor gives off any light. So there’s nothing to photograph, no matter how advanced the technology. In the Event Horizon Telescope’s image, it simply appears as a central dark blob, or what astronomers often call the black hole’s “shadow.”

Event Horizon Telescope: How Does It Work?

Feryal Özel is an astrophysicist at the University of Arizona and an EHT collaborator. She explains the shadow as the black hole absorbing the light around it. The light stems from the hot gas that’s swirling around it and gets heated as it falls into the black hole.

“So, our telescopes are able to pick up the light as long as it comes not from the immediate vicinity of the black hole, but just outside it,” Özel says. “When the light falls into the event horizon, that part is dark in the image. Whether or not shadow is the perfect word, it imprints this darkness on the surrounding emission.”

Taking an image of a shadow where a black hole should exist might not seem extraordinary, but black holes also aren’t strictly speaking proven to exist — at least not everywhere scientists expect them, like at the centers of most large galaxies. And seeing this shadow confirms that it really is a black hole, Özel says.

Like a whirlpool, the material spiraling around a black hole is mostly flat. Scientists call it an accretion disk. And these accretion disks can stretch across vast distances and give off incredibly bright energy that shines across the cosmos. But capturing these beacons is like photographing a mushroom cloud during an atomic blast, when the real science is happening on the level of atoms at the heart of the explosion.

Scientists have long desired to see inside the disk to where the material actually disappears into the black hole. Before EHT, that level of detail had eluded them.

Occasionally, this semi-chaotic swirl of accretion disk material collides with itself, launching matter out in jets that extend thousands of light-years and travel at nearly the speed of light. And astronomers have already photographed M87’s jets using more conventional instruments, like the Hubble Space Telescope.

But the exact cause of these extreme speeds remains unclear. Scientists say that magnetic fields are a prime suspect. “We think the spin of the black hole interacting with the magnetic field is what causes the jets, but we don’t have proof,” says Özel.

Imaging the central area of the black hole should give that proof. “If we see jet-like images or anything associated with it I think it increases our confidence that jets are formed very close to the black hole,” Özel adds.

In addition to the jets, studying the swirl of material near M87 also gives astronomers the most accurate weight ever for this monster black hole, which is one of the most massive in the known universe. Astronomers can weigh the black hole at the center of our Milky Way, called Sagittarius A* (pronounced A-star), by watching the motions of individual stars zooming around its perimeter. But M87’s black hole is much farther away, and the scale is likewise fuzzier. That’s led to disagreements about its mass.

“There are two discrepant measurements,” Özel says. “Our uncertainty is much less than the difference between those two measurements.”

The Event Horizon Telescope’s eight partnering observatories are spaced around the world and linked together through a process known as interferometry. And in fact, some those individual observatories, like the massive Atacama Large Millimeter Array, or ALMA, are themselves interferometers, arrays of telescopes spread across many miles.

The idea behind interferometry is to create one telescope with an enormous collecting area out of many smaller telescopes. That increases the resolution of the final configuration of observatories. But interferometry also has tradeoffs. There is space missing between each instrument — and a lot of it in EHT’s case. This decreases the fidelity of the image, or how accurately the image can recreate the original object. Astronomers use the fact that they do have some idea of what a black hole should look like to narrow down the possibilities.

Another complication is just the logistics of moving around so much data. Each station takes data over a range of wavelengths, resulting in massive amounts of information, as much as 5,000 hours of mp3 music files – too much to transmit over the internet.

For instance, to transport data back from the South Pole Telescope, scientists had to wait until Antarctic spring when the planes finally started flying out again. A shipping pallet packed with the hard drives had to be sent back to the Northern Hemisphere, where data analysis was done at processing centers at the Max Planck Institute in Bonn, Germany, and the MIT-Haystack Observatory in Westford, Massachusetts.

There, the data was correlated, or matched between observing sites. And each individual telescope sees a different angle on the sky, so they observe at different times. That means the data must be matched up precisely to produce one unified image.

“The calibrating and working with it took many months,” Özel says. “And at the end we synthesize it into a single image. And then we spend another six months worrying about all the things you might have done wrong and ask yourself more and more questions, until finally, you can be certain that what you have is real.”

The Future is Clear

Today’s image is just the first astronomers expect EHT to produce. The observatory’s other main target is the black hole at the center of the Milky Way, Sagittarius A*. While it sits 1,000 times closer than M87, it’s also roughly 1,000 times smaller, so it takes the same amount of observing power.

But because it’s smaller, the material swirling around its event horizon moves much faster, completing one circuit every few minutes, as opposed to a few days to circle M87. “It makes Sagittarius A* harder,” Özel concedes.

What’s more, astronomers aiming at Sagittarius A* must look through the disk of the galaxy, and are subject to more dust and other interfering material. But they still expect to release images of our galaxy’s black hole in the near future.

Even more exciting are the repeat images of M87 and other black holes yet to come. By watching how the black hole does or doesn’t change with time, astronomers can learn about stable features of the black hole, and watch how material disappears past the event horizon.