The Event Horizon Telescope: How It Works 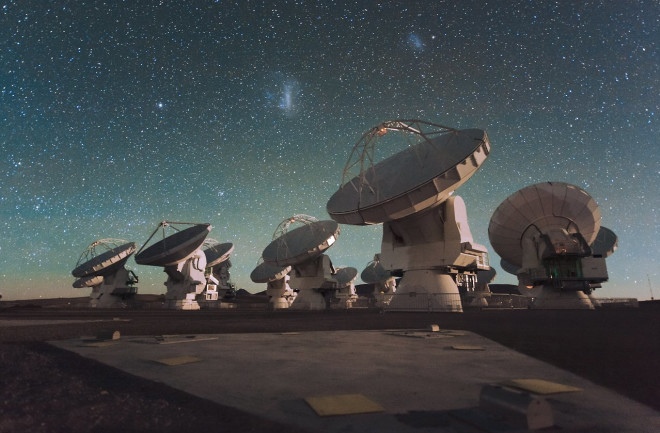 The Atacama Large Millimeter/submillimeter Array (ALMA). (Credit: ESO/C. Malin) A black hole isn't an easy thing to photograph. The famously inscrutable objects are so dense that even light can’t escape their vicinity. By definition, they are invisible. So when the Event Horizon Telescope team released the first image of a black hole, what they really released is an image of the black hole’s event horizon — the minimum distance from the black hole’s center where gravity is still weak enough for light to escape. And how they imaged the supermassive black hole in galaxy M87 it is nearly as impressive as the image itself. EHT scientists convinced researchers around the world to point their radio telescopes at a select group of black holes, then combined the observations to create one giant array the size of our planet. “With this technique, we were able to use essentially the diameter of the Earth as the resolving power,” says John Carlstrom, who heads the EHT partnering South Pole Telescope. That let them glimpse finer details than even the Hubble Space Telescope can.

Read more: Astronomers Get Their Very First Picture of a Black Hole

In 2017, the EHT turned its gaze to supermassive black holes at the centers of two galaxies: our own Milky Way and an elliptical galaxy about 50 million light-years away called M87. Each of these astronomical monsters has a disk of material — gas, dust, plasma, what have you — swirling around the black hole. That material heats up and glows until it eventually falls in. By capturing an image of the glowing disk around M87’s black hole, and the dark inner edge caused by the black hole’s event horizon, scientists not only made history, but also expanded our knowledge of how black holes work.

Taken by the Hubble Space Telescope, this image shows a jet of matter blasting from galaxy M87. (Credit: NASA and The Hubble Heritage Team (STScI/AURA)) So why haven’t astronomers snapped such a pic before? Because it’s an incredibly difficult feat. One of the biggest challenges is how tiny a target they actually are. Supermassive black holes have a lot of mass, sure, but they’re also super compact. The one in the center of our galaxy, called Sagittarius A*

(Sgr A*), has an event horizon smaller across than the distance between the sun and Earth. And it’s roughly 26,000 light-years away, so it takes up a minuscule amount of sky — just a few billionths the width of the full moon. The black hole at the center of M87 is a whopping 1,000 times bigger than our own but it also sits roughly 2,000 times farther away. So it’s more or less the same size in Earth’s sky as Sgr A*. To photograph either black hole, you need a really powerful telescope. Generally, the resolution of a telescope — how small of a target it can see — comes down to its size. The larger the telescope, the more resolving power it has, and the smaller the details it can make out. But even the largest radio dishes in the world, like the Arecibo Observatory

in Puerto Rico and the Five-hundred-meter Aperture Spherical Telescope

in China (each more than 1,000 feet across), aren’t big enough to image these black holes.

Radio astronomers can get around this problem by linking together lots of smaller radio dishes into a single array, where they effectively act as one giant telescope. It’s a technique called astronomical interferometry.

Each dish in the array collects light from a target object, like the glowing disk around a black hole, and converts the radio waves it receives into an electronic signal. Then a computer called a correlator combines all the electronic signals from the various dishes into what’s called an interference pattern. Finally, astronomers tapped a special kind of math (Fourier transforms

for the curious) to decode that pattern, showing what the target would look like in the sky if our eyes could see in radio wavelengths.

The Very Large Array in New Mexico, which is part of the larger Event Horizon Telescope. (Credit: Alex Savello/NRAO) With an array of radio telescopes, it’s the distance between individual dishes, rather than the diameter of a single dish, that determines the array’s resolving power. The farther apart two dishes are, the better the resolving power of that array. That’s why radio observatories like the Very Large Array

in New Mexico and the Atacama Large Millimeter Array

in Chile can have dishes miles apart. But even these arrays aren’t big enough to resolve the tiny radio speck in the sky that is the supermassive black hole in the Milky Way, or the one in M87. So, to really crank up the resolution, the EHT used a form of this technique called very-long baseline interferometry

. Instead of relying on a single location, astronomers combined data from telescopes in entirely different areas — different continents even — using precise atomic clocks and GPS systems to carefully time the observations and keep everything in sync. “You can put your antennas anywhere on the Earth that you like. You can put one in California, and put one in West Virginia,” says Jim Braatz, an astronomer at the National Radio Astronomy Observatory who is not part of the EHT collaboration. “With those two antennas, you can kind of simulate or mimic a telescope with the diameter of the whole country.” The EHT has taken that to a global scale to make a telescope as big as our entire planet. Radio telescopes in Arizona, Hawaii, Mexico, Chile, Spain and even Antarctica all observed their black hole targets in tandem. With dishes spread as far as possible, the EHT aims for nothing less than the maximum resolution a radio array can get without leaving Earth. “In general, the more pairs of antennas that you have,” Braatz says, “the better the image you'll get at the end of the day.” That’s why this first black hole image is so impressive — and it’s just the first of many results we’ll soon see from the EHT. The research is published today in The Astrophysical Journal Letters