The Dark Matter of the Human Brain

Mysterious cells in your brain, known as glia, outnumber your neurons 10 to 1, and nobody knows what they do. 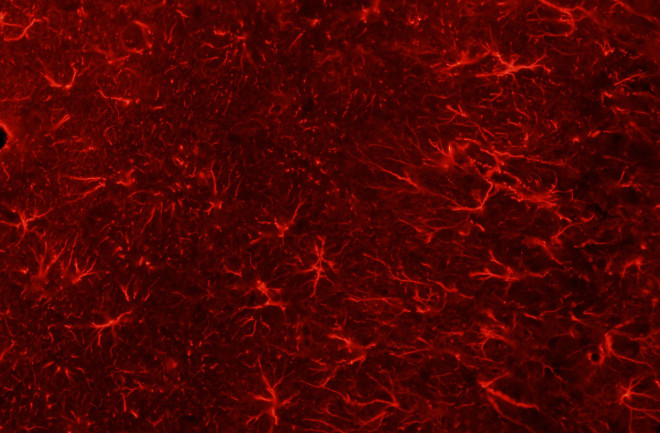 Glia (seen here in red) may process information, much as neurons do. | ArizonaLifeScience via Wikimedia

Some of the common words we use are frozen mistakes. The term influenza comes from the Italian word meaning “influence”—an allusion to the influence the stars were once believed to have on our health. European explorers searching for an alternate route to India ended up in the New World and uncomprehendingly dubbed its inhabitants Indios, or Indians. Neuroscientists have a frozen mistake of their own, and it is a spectacular blunder. In the mid-1800s researchers discovered cells in the brain that are not like neurons (the presumed active players of the brain) and called them glia, the Greek word for “glue.” Even though the brain contains about a trillion glia — 10 times as many as there are neurons — the assumption was that those cells were nothing more than a support system. Today we know the name could not be more wrong.

Glia, in fact, are busy multitaskers, guiding the brain’s development and sustaining it throughout our lives. Glia also listen carefully to their neighbors, and they speak in a chemical language of their own. Scientists do not yet understand that language, but experiments suggest that it is part of the neurological conversation that takes place as we learn and form new memories.

If you had to blame one thing for the mistaken impression about glia, it would have to be electricity. The 18th-century physiologist Luigi Galvani discovered that if he touched a piece of electrified metal to an exposed nerve in a frog’s leg, the leg twitched. He and others went on to show that a slight pulse of electricity moving through the metal to the nerve was responsible.

Over the next two centuries scientists got a clearer understanding of how those signals work. When a branch at one end of a nerve cell, or neuron, is stimulated, an electric pulse races toward the main body of the cell. Other branches might send separate pulses at the same time. The main body of the neuron conveys those pulses to an outgoing arm, or axon, which splits into numerous branches, each of which nearly touches other neurons. The slight gap between two nerve cells is called a synaptic cleft. The signal-sending neuron pumps chemicals into the space, and the signal-receiving neuron takes up some of them, triggering a new electric pulse.

Neurons have certain characteristic attributes: axons, synapses, and the ability to produce electric signals. As scientists peered at bits of brain under their microscopes, though, they encountered other cells that did not fit the profile. When impaled with electrodes, these cells did not produce a crackle of electric pulses. If electricity was the language of thought, then these cells were mute. German pathologist Rudolf Virchow coined the name glia in 1856, and for well over a century the cells were treated as passive inhabitants of the brain.

At least a few scientists realized that this might be a hasty assumption. The pioneering neuroscientist Santiago Ramón y Cajal earned a Nobel Prize in 1906 for what came to be known as the neuron doctrine — the theory that neurons are the fundamental units of the brain. Ramón y Cajal didn’t think glia were necessarily just glue, however. Instead, he thought they were a mystery—a mystery, he wrote, that “may remain unsolved for many years to come until physiologists find direct methods to attack it.”

Today the mystery of glia is partially solved. Biologists know they come in several forms. One kind, called radial glia, serve as scaffolding in the embryonic brain. Neurons climb along these polelike cells to reach their final location. Another kind of glia, called microglia, are the brain’s immune system. They clamber through the neurological forest in search of debris from dead or injured cells. A third class of glia, known as Schwann cells and oligodendrocytes, form insulating sleeves around neurons to keep their electric signals from diffusing.

But the more neuroscientists examine glia, the more versatile these cells turn out to be. Microglia do not just keep the brain clean; they also prune away extra branches on neurons to help fine-tune their developing connections. Oligodendrocytes and Schwann cells don’t just insulate neurons; they also foster new synapses between them. And once radial glia are finished helping neurons move around the developing brain, they don’t die. They turn into another kind of glia, called astrocytes.

Astrocytes — named for their starlike rays, which reach out in all directions — are the most abundant of all glial cells and therefore the most abundant of all the cells in the brain. They are also the most mysterious. A single astrocyte can wrap its rays around more than a million synapses. Astrocytes also fuse to each other, building channels through which molecules can shuttle from cell to cell.

All those connections put astrocytes in a great position to influence the goings-on in the brain. They also have receptors that can snag a variety of neurotransmitters, which means that they may be able to eavesdrop on the biochemical chatter going on around them. Yet for a long time, neuroscientists could not find any sign that astrocytes actually responded to signals from the outside. Finally, in 1990, neuroscientist Ann Cornell-Bell, then at Yale, discovered what seemed to be a solution to the mystery. It turned out that astrocytes, like neurons, can react to neurotransmitters—but instead of electricity, the cells produce waves of charged calcium atoms.

The calcium comes from sealed packets scattered through the astrocytes. When stimulated, the cells rip open the calcium packets in the ray that first senses the neurotransmitters, triggering the opening of other packets elsewhere in the cell. The astrocytes then stash the calcium atoms back in their packets, only to unleash them again when next stimulated. Cornell-Bell noticed that a wave of such activity that started in one astrocyte could spread to other astrocytes. Several research teams also discovered that astrocytes themselves release powerful neurotransmitters. They can produce glutamate (which excites neurons so that they are more likely to respond to a signal from another neuron) and adenosine (which can blunt a neuron’s sensitivity).

For some brain scientists, these discoveries are puzzle pieces that are slowly fitting together into an exciting new picture of the brain. Piece one: Astrocytes can sense incoming signals. Piece two: They can respond with calcium waves. Piece three: They can produce outputs—neurotransmitters and perhaps even calcium waves that spread to other astrocytes. In other words, they have at least some of the requirements for processing information the way neurons do. Alfonso Araque, a neuroscientist at the Cajal Institute in Spain, and his colleagues make a case for a fourth piece. They find that two different stimulus signals can produce two different patterns of calcium waves (that is, two different responses) in an astrocyte. When they gave astrocytes both signals at once, the waves they produced in the cells were not just the sum of the two patterns. Instead, the astrocytes produced an entirely new pattern in response. That’s what neurons—and computers, for that matter—do.

If astrocytes really do process information, that would be a major addition to the brain’s computing power. After all, there are many more astrocytes in the brain than there are neurons. Perhaps, some scientists have speculated, astrocytes carry out their own computing. Instead of the digital code of voltage spikes that neurons use, astrocytes may act more like an analog network, encoding information in slowly rising and falling waves of calcium. In his recent book, The Root of Thought, neuroscientist Andrew Koob suggests that conversations among astrocytes may be responsible for “our creative and imaginative existence as human beings.”

Until recently, studies of astrocytes examined only a few cells sitting in a petri dish. Now scientists are figuring out how to observe astrocytes in living animals and learning even more about the cells’ abilities. For instance, Axel Nimmerjahn, formerly of Stanford University, developed with his colleagues a way to mount microscopes on the skulls of mice. To watch the astrocytes, they inject the mice with molecules that glow when they bind to free calcium. Whenever a mouse moves one of its legs, Nimmerjahn and his colleagues can see a little burst of calcium waves. In some cases, hundreds of astrocytes may flare up at once, and the flares can last as long as several seconds.

Astrocytes are also vital for synapses. Stanford University neuroscientis Ben Barres and his colleagues found that neurons that grew with astrocytes formed nearly 10 times as many synapses as neurons growing without them, and the activity in those synapses was nearly 100 times greater. More recently, they discovered evidence that the epilepsy and pain drug Neurontin apparently prevents glia from inducing new synapses, which may be how it eases neuropathic pain. Since synapses change as we learn and form new memories, Marie E. Gibbs of Monash University in Australia suspected that astrocytes might be important to our ability to learn. To test that idea, she and her colleagues gave chicks colored beads to peck at. The red beads were coated in a bitter chemical; usually a single peck was enough to make the chicks learn never to peck a red bead again. But when they were injected with a drug that prevented astrocytes from synthesizing glutamate, the birds were unable to remember the bad taste and would peck at the beads again.

These sorts of experiments have not swayed some skeptics. If the calcium waves really are so important, for instance, you would expect that a genetically modified mouse that couldn’t make calcium waves would be one sorry rodent. Ken McCarthy, a neuroscientist at the University of North Carolina at Chapel Hill, engineered mice to grow astrocytes that lack a key protein required to pry open their calcium packets. Yet these mice grew up to be indistinguishable from ordinary ones, for reasons still unclear.

There is something marvelous in the fact that we barely understand what most of the cells in our brains are doing. Beginning in the 1930s, astronomers realized that all the things they could see through their telescopes — the stars, the galaxies, the nebulas — make up just a small fraction of the total mass of the universe. The rest, known as dark matter, still defies their best attempts at explanation. Between our ears, it turns out, each of us carries a personal supply of dark matter as well.