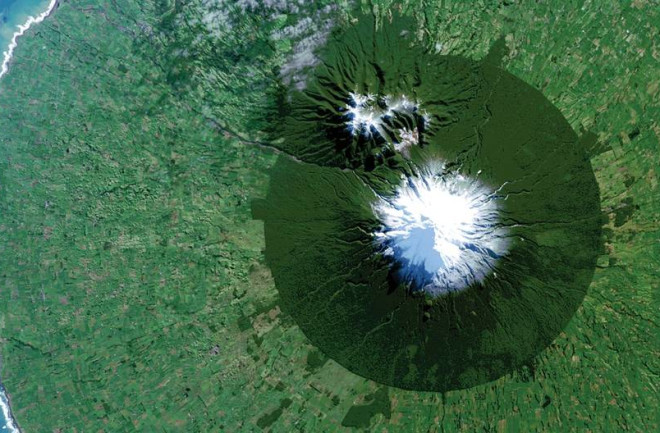 A ring of protected land around New Zealand's Mt. Taranaki is surrounded by pasture. Land use changes have likely been influencing species distributions for thousands of years, according to a new study. (Image: NASA/USGS) It’s hard to deny that humans are shaping planet Earth: from atmospheric composition to urban heat islands and widespread habitat loss, “before” and “after” comparisons reveal pervasive changes. These alterations are among the justifications for the proposed “Anthropocene” geologic epoch, which recongizes the dominant role of human activity on a number of planetary parameters. And while the most dramatic changes have occurred since the Industrial Revolution, a new study suggests that our ancestors’ activities were having dramatic effects on biodiversity thousands of years earlier, long before coal-fired power plants kicked the Anthropocene into overdrive. Kathleen Lyons, a Research Scientist at the Smithsonian’s National Museum of Natural History, led a small army of scientists in the study, published this week in Nature. The amount and variety of data – 80 collections of mammal and plant spatial occurrence data ranging from the present to 300 million years ago – represents the most comprehensive compilation of its kind. These 80 data sets came from 13 different researchers, were obtained from four modern-day continents, and spanned anywhere from four to 4500 kilometers. But as complex and sprawling as the data was, the analyses were deceptively simple. Let’s take a South African assemblage of large mammal fossils, for example. At 103 different sites going back 12000 years into the past, samples were collected and species were recorded. All told, 48 different species were found during the survey, and their patterns of co-occurrence at each of the 103 sites were noted. By assembling such data, the researchers could examine species pairs: were both Species A and Species B found at site 1? What about Species A and Species C? Or A and B at site 78? Lyons compared this information to a randomized assortment of the 48 species and used a battery of statistical tests to determine if there was any real difference in how the spatial associations shook out. There were three options: two different species could be randomly distributed, showing no discernable pattern; they could be segregated, preferentially occurring at different sites but rarely together; or they could be aggregated, showing up at the same sites more often than not. Returning to the South African large mammals, 1128 pairings were possible (47 + 46 + 45…); of these, most showed random distributions (1091), but there were noticeably more aggregated pairings (25) than segregated pairings (12). The parameters for each of the 80 collections were different, of course – different number of species, spatial range, age range – but the pairwise comparison strategy was the same. And what emerged was an intriguing trend that took a dramatic turn several thousand years ago. As with the South African samples, most old fossil compilations showed a preference for aggregated pairs over segregated pairs, revealing a more interdependent ecosystem with intricate species webs and a range of possible symbioses. But around 6,000 years ago (give or a take a couple thousand years – the precise timing is difficult to pinpoint), the pattern began to change, and species were more commonly found apart than together. Before the dividing line aggregated pairs outnumberd segregated pairs by 2-to-1; afterward, the relationship flipped. So what caused the change? Lyons rules out dramatic climate variability associated with glacial-interglacial cycles and settles instead on anthropogenic factors. “The statistical confidence interval bracketing the breakpoint at 6,000 years ago,” the authors write, “encompasses the beginning of agriculture in North America around 8,000 years ago and the increase in human populations.” (Most of the more recent data sets came from North America.) This is academic journal-speak equivalent of shouting from the rooftops, and Lyons highlights several possible roles that burgeoning human societies may have played. Hunting and domestication, agriculture, land use changes that could inhibit movement, and the intentional and accidental spread of species beyond native ranges could all have played a part. The allegorical subtext of this study is difficult to ignore. Gregory Dietl, in writing a commentary for Nature, points out that Lyons’ data emphasizes the Anthropocene as a brave new world with no historical precedent. The urge to use the past as a guide to the present may not apply to ecological issues, making it tough to see how our actions will continue to fragment ecosystems and tug at the fabric of ecosystems around the world. Gaining a more causal understanding of what exactly changed several thousand years ago will be an important next step that may yield valuable clues to our uncertain future.