Summer of Volcanoes: What Is Bimodal Volcanism? 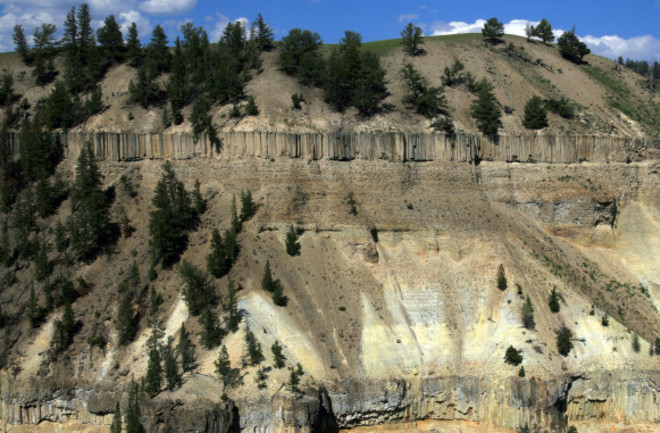 Basaltic lava flows (columns) in-between rhyolitic ash deposits at Yellowstone Caldera. Brocken Inaglory | CC BY-SA 3.0Eruptions readers have lots of great questions about volcanoes and this summer, I want to tackle some of them. So, for the rest of the summer while I'm in and out of the office, I'll be trying to answer one reader question per week (along with trying to keep up with the usual volcanic news goodies). If you want to submit a question, you can send it to me (eruptionsblog at gmail), tweet it to me (@eruptionsblog) with the hashtag #summerofvolcanoes (or just #sofv) or leave it as a comment below. This week's question is great and gives you a send of the types of questions I'm seeking. Hopefully you'll enjoy this more in-depth looks into volcanoes and magma.

Summer of Volcanoes #1Submitted by Lockwood DeWitt: How does bimodal volcanism work? Bimodal volcanism is whenever you have a volcano that erupts basalt and rhyolite ... and really nothing else in-between. What does that mean? Well, first we need to understand how we classify magma. The most common way is to look at the silica (SiO2) of the magma as most molten rock is made of silica. Magma with low silica (defined at 47-53% of the magma made of silica by weight) is called "mafic". If you erupt mafic magma, we call that lava "basalt", a term that many of you have heard before. Hawaii's Kilauea erupts almost entirely basalt lava, forming the classic lava flows, lava fountains and lava lakes. We call lava with 53-67% by weight silica "intermediate" and that covers the range of andesite and dacite lava. Once you're above 67% by weight silica, you're into "silicic" or "felsic" lava, typified by rhyolite. Eruptions of rhyolite usually form lava domes or explosive eruptions. Now, at some volcanoes, you might get a little bit of all these flavors of lava erupting. Volcanoes like South Sister in Oregon have this smorgasbord of lavas, with everything from basalt to rhyolite erupting over their history. This suggests that there is a lot of magma mixing, cooling and reactivation of crystals and magma under the volcanoes, creating a wide diversity of compositions from a single volcano. This is typical for volcanoes forming in subduction zones.

Little Glass Mountain in the foreground, a rhyolite lava flow/dome, with small, tree-covered basaltic cinder cones at Medicine Lake in California. The volcano in the background is Shasta. U.S. Forestry Service That's not what you get with bimodal volcanism. At places like Yellowstone (see above) or Medicine Lake in California, you only see two types of lava erupted: basalt and rhyolite. None (or very, very little) of the intermediate lavas ever erupt. Sometimes you find evidence that the basalt and rhyolite mingled (rather than mixed), but andesite and dacite is absent from the volcanic record. Bimodal volcanism isn't used only to describe a volcano. Entire volcanic provinces can be called bimodal, like the Basin and Range in the United States. Why would you get eruptions of basalt and rhyolite only, especially if at many volcanoes around the world you get the full spectrum? A lot of it boils down to the type of tectonic setting and properties of the magma. Bimodal volcanism is usually found in places where there is extension of the crust, like a rift in a continent, or at hotspots where plumes hot mantle material are rising up underneath a plate. In both places, the mantle is melting due to decompression: as it rises under the plate, it feels less pressure while staying hot, so it melts. All that melting produces a lot of basalt, one end of our bimodal spectrum. That's the easy part. You produce a lot of basalt, but how do you get the silicic partner, rhyolite? There are a number of paths that you can take to make rhyolite. One way is to let the basalt cool. This causes fractional crystallization. This is when minerals form in magma, progressively pulling different elements out of the magma and changing what is left of the magma as it cools. This process enriches the magma that is left over as minerals form in silica. Wait long enough, a big volume of basalt will produce some small volume of rhyolite as it cools. The problem here is that if you're merely letting magma cool, it becomes a lot harder to erupt. Silicic magma like rhyolite is very sticky and only becomes more so as it cools. This is why in places where cooling basalt to produce rhyolite might be happening, we find it as pockets of magma underground (usually stumbled across while drilling, like what happened in Iceland or Hawaii) rather than as erupted lava. If you want to get that rhyolite to erupt, you likely need a lot of it (think Iceland) or you need it to form in a different fashion So, another way to produce rhyolite magma is to start melting the crust that all the basalt intrudes. Basalt is hot, usually over 1200ºC, so when it rises into the crust, it can melt it to form rhyolite (the first magma to form when you melt most rock -- the opposite of fractional crystallization -- called "partial melting"). When you melt the crust, you get new, hot rhyolite that could be triggered to erupt as more, even hotter basalt intrudes. You could even melt the crystal mush left behind by a previous intrusion of basalt to get some rhyolite. In any case, the rhyolite lava is formed by adding a lot of heat and melting the crust.

Schematic diagram of the Medicine Lake magmatic system. Stipled areas are rhyolite while cross-hatched are basalt. John (1996), Economic Geology We still need to get a compositional gap to form -- that lack of intermediate magma. This is one area of research that is still definitely up for debate: how do we produce that basalt-rhyolite compositional split without anything in-between? There are two ways it could happen. One is to melt the crust enough times that you can't melt it anymore. Each time you melt some rock, it gets harder to melt again as you've removed the part of the rock that is easy to melt (again, thanks to partial melting). So, intrude basalt into the crust and, at first, you get a lot of rhyolite. However, keep doing it and the rhyolite will stop forming eventually and you instead just erupt the basalt. Another way is taking advantage of the density and viscosity difference of rhyolite and basalt. Let's say you melt the crust to form a body of rhyolite in the crust. That rhyolite is ~100 million times more viscous than basalt, so they don't mix. Think of it like trying to easily mix cold honey and water -- it doesn't happen. Rhyolite (~2.67 g/cm^3) is much less dense that basalt (~2.9 g/cm^3), so as that hot basalt rising through the crust, when it hits the rhyolite, it can't keep rising, so it underplates the rhyolite (see above). Rhyolite erupts in the along fractures and basalt erupts around the edges where it doesn't intersect that molten rhyolite. That's bimodal volcanism. You need lots of basalt (source of heat) to melt the crust (source of rhyolite). The very different physical properties of magma mean they likely don't mix much, so instead you get rhyolite eruptions with basalt eruptions thrown in. A great example is Medicine Lake in California, where a shield volcano formed in an area of spreading called a back-arc. You constructed a large basaltic volcano that is capped with big rhyolite lava flows, likely formed from melting the crust underneath the volcano. Around the rhyolite you find basaltic cinder cones that come up around the rhyolite. It takes special conditions to get bimodal volcanism to occur, but it makes hazard planning that much more complex. In areas dominated by bimodal volcanism, volcanologists have to try to determine whether signs of unrest are leading to an eruption of basalt or rhyolite. The former is more benign, like the Holuhraun lava flows in Iceland. The latter is far more dangerous as a large explosion eruption caused by rhyolite can have wide-ranging impacts.