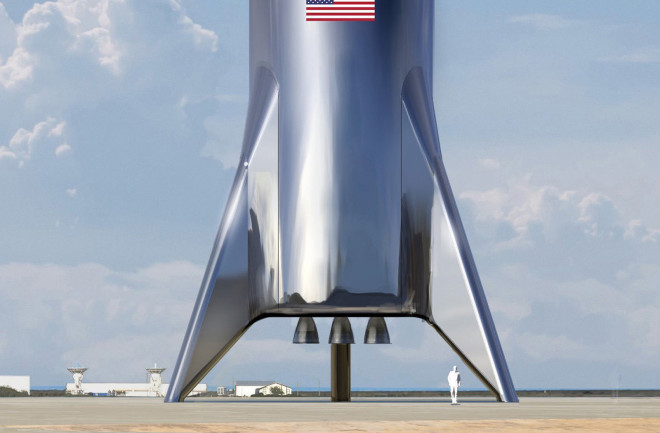 SpaceX gave the public a glimpse of what their Starship vehicle may look like with an illustration. (Credit: SpaceX)

SpaceX is on the verge of launching a prototype of the spacecraft that could one day carry humans to the moon and Mars. Over the weekend, SpaceX CEO Elon Musk shared on Twitter on Saturday morning (Jan 5) that the flight-test version of the Starship vehicle could be ready to embark on its first excursion in just a few weeks.

This initial trip will be the rocket’s first “hopper test,” a short test run. Later tests, expected to take place in 2020, will be performed at higher altitudes and at higher velocities.

Musk followed up this announcement with a tweet containing an illustration of the Starship vehicle, which is still under assembly. As pictured, the craft looks decidedly retro, a throwback to 20th-century space-race-era ships. Musk added in the tweet that the operational, final vehicle would have windows and other traditional features that are not included in the illustration.

To the Moon and Mars

SpaceX is developing Starship alongside their Super Heavy rocket to ferry humans to and from the moon, Mars, and even potentially other locations in the solar system. The rocket and vehicle together were previously called the BFR, but Musk recently changed the name.

According to Musk, the company is aiming for the vehicle to carry its first crew to Mars as early as the 2020s. The vehicle holds as many as 100 passengers, and Musk intends for Japanese billionaire Yusaku Maezawa and a variety of artists to ride around the moon. This would make the crew the first private citizens to ever fly beyond low Earth orbit.

Both SpaceX’s Starship vehicle and the Super Heavy rocket will use the company’s Raptor engine, which is still in development. Musk tweeted last week that the engines on the Starship hopper prototype “are a blend of Raptor development & operational parts.”