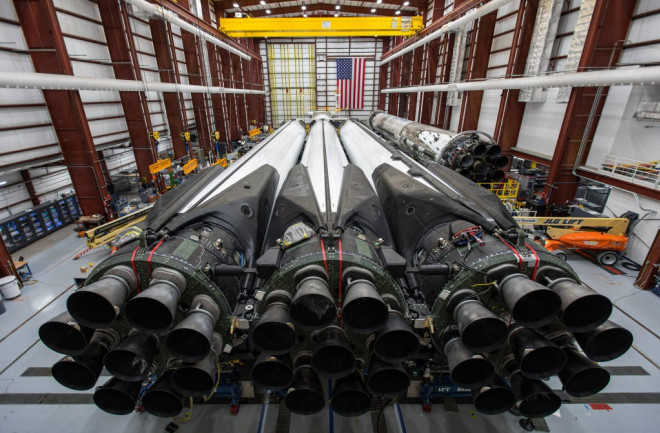 Falcon Heavy's three Falcon 9 components are clearly on display in the hangar before its Wednesday launch. (Credit: SpaceX) SpaceX’s Falcon Heavy will launch on its first commercial flight tomorrow. The rocket launch was postponed from early April due to unspecified concerns, and then postponed again just this week due to weather. But Wednesday has a clear forecast with an 80 percent probability of a launch, so odds are good the mission will proceed. The launch window opens at 6:35 p.m. EDT. Falcon Heavy is a modified version of SpaceX’s standard Falcon 9 rocket, essentially made up of three Falcon 9’s strapped together, albeit with a reinforced center core. It was built to serve as SpaceX’s heavy lift vehicle, with five million pounds of thrust capable of putting even large payloads into Earth orbit and beyond. Falcon Heavy’s actual payload tomorrow is the Saudi Arabian Arabsat-6A communications satellite, weighing a little over 13,000 pounds. The rocket is capable of delivering up to 59,000 pounds to a similar orbit, but that would mean SpaceX wouldn't be able to recover their boosters for reuse. Whenever possible, SpaceX plans to launch at lower speeds so they can land and possibly reuse the boosters that make up Falcon Heavy. Tomorrow's launch follows a plan similar to Falcon Heavy's first test flight last year. Then, the side boosters landed successfully while the center core missed its target on a barge at sea and was destroyed. Once again, the two side boosters will attempt a landing at Cape Canaveral. The standard Falcon 9 boosters have had multiple successful landings at this point, and they are expected to be reused for future missions. In fact, the two side boosters that will fly tomorrow are already earmarked for Falcon Heavy’s next flight, currently slated for June. That will be the first Falcon Heavy flight to re-use boosters. The reinforced center booster will again attempt an ocean landing on the drone ship, where there is more margin for error. Because of its reinforcements, that booster is heavier, and because it is the center core, it flies higher and faster than the side boosters, increasing the difficulty of landing. After the missed landing in 2018, Musk revealed that the center core didn’t have enough ignition fluid to light all of its engines used for landing, and called the solution “obvious.” The true test will happen tomorrow, if Falcon Heavy can not only launch but also land its three boosters. At the end of the month, on April 25, SpaceX is also expected to launch their regular Falcon 9 rocket and Dragon cargo capsule for their 17^th supply mission to the International Space Station. Editor's Note: A previous version of this story incorrectly stated the launch time. Falcon Heavy's latest launch window begins at 6:35 p.m. EDT, not a.m.