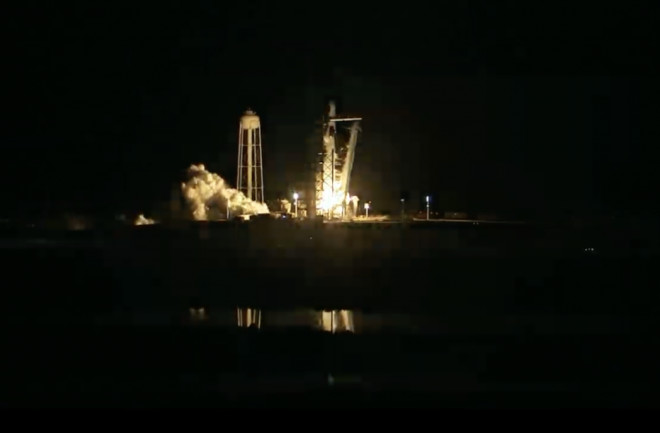 If the rest of the flight goes well over the next six days, and NASA certifies the capsule is safe, Elon Musk’s rocket company could begin launching astronauts into orbit this summer. That would mark the first time a private company has launched a human into orbit. Saturday’s launch was a pivotal test flight for human-crewed missions, even though the only passengers on this trip are a mannequin named Ripley, after the character from the Alien movie franchise, and a free-floating Earth plush toy brought aboard in the final hours. There’s also about 400 pounds of cargo and equipment onboard for the International Space Station. Crew Dragon, or Dragon 2, will dock there on Sunday, stay for five days, and then depart before splashing down in the Atlantic Ocean on March 8. The return trip will be an additional test of the capsule’s safety.

On Saturday, the Falcon 9 rocket that put Crew Dragon into orbit also landed flawlessly back on Earth for future reuse, a key feature that’s made SpaceX’s technology more affordable than anything that’s come before.

This flight is a milestone for NASA and for SpaceX. NASA has been without a domestic carrier for their astronauts since the end of the space shuttle program in 2011. The space agency has relied on Russian Soyuz capsules for access to ISS ever since. SpaceX and Boeing are both in the final stages of testing the multi-billion dollar capsules NASA contracted them to build under its Commercial Crew program. And NASA hopes to certify the companies to fly crewed missions before the end of the year. That certification relies on today’s so-called Demo-1 mission succeeding, as well as SpaceX’s Demo-2 flight scheduled for July. That second trip will have NASA astronauts on board. Boeing has similar uncrewed and crewed test flights planned for April and August, respectively.

SpaceX has flown 16 missions to ISS using their Dragon cargo capsule, but this is their first full flight of the redesigned Crew Dragon capsule, also known as Dragon 2, with seats on the inside for six crewmembers, life support systems, controls, and additional safety precautions should anything go wrong during launch or landing. Those precautions include additional thrusters in case they need to abort after launch but before reaching orbit, and an extra parachute (four instead of the usual three) for landing.

This will also be the first time the Dragon capsule has docked, instead of merely berthed, with ISS. This means Dragon will connect to the ISS under its own guidance and propulsion. Previously, it has merely flown close before being grabbed by a robotic arm under the control of ISS crewmembers. The three members currently aboard ISS will also get the chance to enter Dragon in space in order to remove the cargo.

NASA and SpaceX will be carefully monitoring the capsule throughout its mission, and the dummy, Ripley, will track how the flight feels from inside the capsule.

NASA and SpaceX will be livestreaming the remainder of the flight periodically as it progresses over the weekend.