[UPDATE 19:30 UT): SUCCESS! SpaceX successfully launched the Falcon 9, and the Dragon capsule is now in orbit. We're awaiting the orbital numbers right now (velocity, height, ellipticity, etc). There was a tense time there for a while when they initially had an abort with just six seconds left. But they reset, and launched the bird. A huge CONGRATS to SpaceX for opening a new door on the space age.]

[Update (14:30 UT): The start of the launch window has been moved to 15:20.] The private rocket company SpaceX plans to have its first test launch of the Falcon 9 rocket today! The launch window opens at 15:00 UT (11:00 a.m. Eastern time), and lasts for four hours. They will start a webcast of the launch at 14:40 UT. The ultimate goal is to get the bird into orbit, but they have a number of flight milestones to achieve. 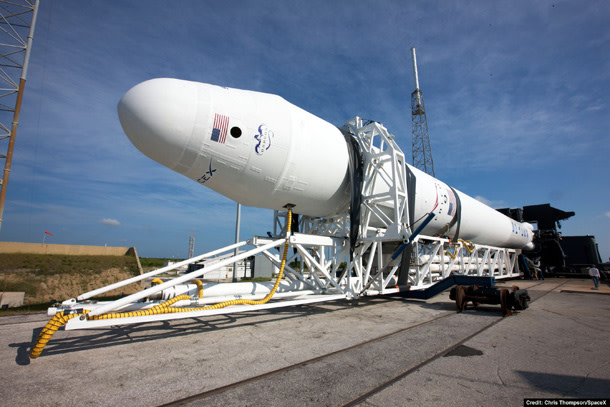 On the rocket will be their qualification version of the Dragon payload capsule. This allows them to test both the rocket and the capsule simultaneously. Weather looks pretty good for liftoff as I write this, though there's a 40% chance of delays. They also have a launch window for the same times reserved for the next day, Saturday, June 5. Stay tuned, and check the SpaceX site for updates! Image credit: Chris Thompson/SpaceX