Spacecraft Will Search for Evidence of a Hypothetical Lost Planet 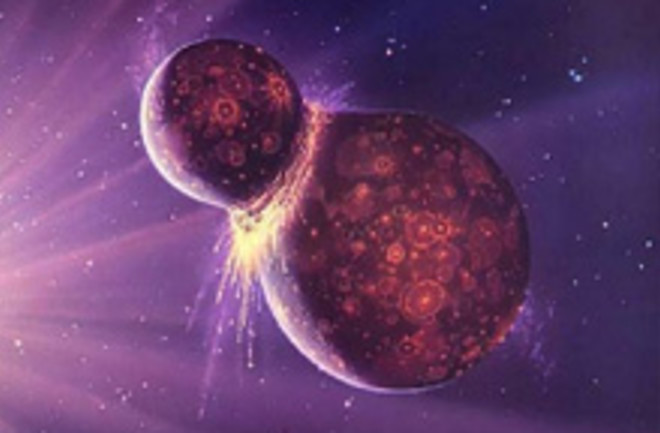 Astronomers are hoping to catch a glimpse of debris that could be leftover from a cosmic collision between our Earth and a Mars-sized planet called Theia--if, in fact, it existed at all.

"It's a hypothetical world. We've never actually seen it, but some researchers believe it existed 4.5 billion years ago — and that it collided with Earth to form the moon," said Mike Kaiser, a NASA scientist [SPACE.com].

The research will be done with the two Stereo spacecraft that are on their way to observe the sun; on their way they'll have a chance to do some "bonus science," as one researcher called it. The spacecraft are passing through two regions of space,

called Lagrangian points, where the gravity from the Earth and the sun combine to form wells that tend to collect solar system detritus.... Scientists think Theia may even have formed in one of these gravitational points of balance from the accumulation of flotsam that had built up there [SPACE.com].

According to one theory of our moon's origin, the gravitational pull of Venus may have tugged Theia out of its stable spot, and sent it careening into Earth.

The glancing blow stripped the impactor of its outer layer, along with some of Earth’s. Its iron core is thought to have melted and much of it merged with Earth’s iron core. The outer material – mostly belonging to the impactor – gathered itself together and formed the moon. [This theory] explains why the moon has such a tiny iron core. It also explains why the the geochemistry of Earth and moon materials are so similar – they formed in the same region of the nebula of dust and gas that surrounded the early sun [The Christian Science Monitor].

Astronomers have looked for large "Theiasteroids" in the Lagranian points with ground-based telescopes, with little success. But the Stereo spacecraft will have a better view that will allow it to search for smaller asteroid chunks. The spacecraft pair will also study the mineral composition of any asteroids it sights to determine if they're chemically similar to Earth or the moon. Related Content: 80beats: Did an Asteroid Strike Billions of Years Ago Flip the Moon Around? 80beats: Moon Rock Suggests the Young Moon Had a Fiery Core and a Magnetic Field DISCOVER: Geophysics: Is the Earth’s inner core simply the other half of our only satellite? DISCOVER: Where Did the Moon Come From?Image: NASA