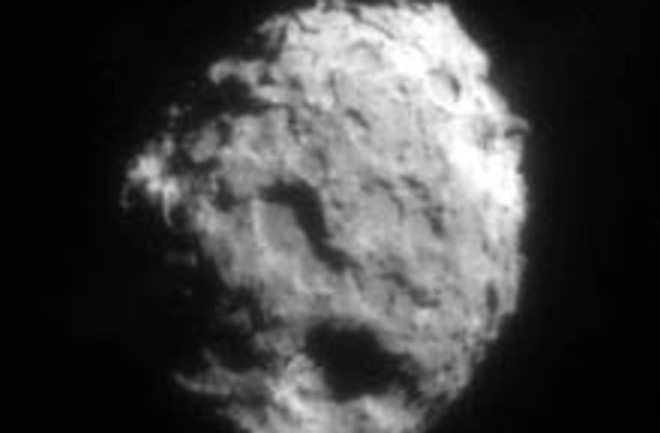 Since NASA's Stardust mission returned in 2006 from its trip of billions of miles collecting the dust of a comet called Wild2 and dropped it samples down to Earth in the Utah desert, the samples have raised all sorts of questions about how comets formed and what the early solar system was like. In a study this week in Science, there's a new surprise. Scientists say that the comet sample contains chemicals that must have formed in our home turf, the inner solar system. Lead researcher Jennifer Matzel studies a tiny particle taken from Stardust's sample, a piece just five micrometers across. In it her team found the mark of materials that would have formed under high temperatures.

Matzel, who specializes in using the decay rates of radioactive chemical elements to assess ancient dates, determined that the Stardust particle must have crystallized just 1.7 million years after the oldest solid rocks in the solar system were forming [San Francisco Chronicle]

. After that, the researchers says, the particle must have been flung out to the Kuiper Belt, the region of icy comets revolving around the sun at a distance far past Neptune. Matzel doesn't know for sure how this migration would have happened, but she's excited about it.

"The new and interesting thing about this paper is it's the first time we've been able to get some estimate of the timing," Matzel says. "Even though it's a very old object and it formed very close to the sun, it had some longer history in the inner solar system before it got flung out to the comet-forming region" [Scientific American]

. The trip would not have been easy. NASA's Joseph Nuth notes that Jupiter would be forming by this time in the early solar system's history, and that would have been a major obstacle that outwardly-migrating material would have had to overcome. Once again, Stardust has proven to be great at providing the unexpected.

Earlier findings showed that the comet's cloud unexpectedly contains the same rocky materials as the asteroids that orbit the sun between Mars and Jupiter, as well as molecules of glycine, an organic compound essential for life [San Francisco Chronicle]

. More hints about the early solar system probably await in the stardust it brought back. And while the Stardust "mothership" successfully dropped its sample capsule to Earth in 2006, the spacecraft's voyage isn't done. Stardust is now on its way to the comet Tempel 1, the comet impacted by the Deep Impact spacecraft in 2005, where it will take photographs of the crater produced by that impact. Related Content: 80beats: Dust Collected From Comet Contains a Key Ingredient For Life 80beats: Meteorite, Maybe Older Than The Sun, Shows Chemistry of Ancient Solar System DISCOVER: NASA Takes a Wild Comet RideImage: NASA