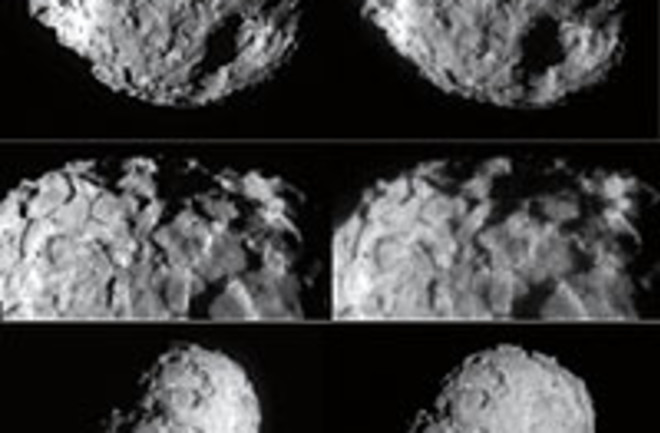 Most comets reside unseen in the dark outer reaches of the solar system, frozen relics of the era when the planets formed 4.6 billion years ago. When they pass close to the sun’s light and heat, they can become spectacularly visible, but even then they are so small and fast-moving that they are difficult to study. So researchers could barely contain their excitement last January when NASA’s Stardust spacecraft came within 150 miles of comet Wild 2, capturing the best look ever at one of these enigmatic objects.

Close-up photos revealed that the 3.1-mile-wide clump of rock and frozen gas is covered with deep craters and vast sinkholes, tall spires, flat-topped mesas, and sheer cliffs. “A lot of people imagined that comets were just piles of gravel and sand,” says Donald Brownlee of the University of Washington, head of the Stardust research team. “But you cannot make vertical cliffs and pinnacles up to 100 meters [300 feet] high out of sand. Whatever Wild 2’s surface is, it has to have some strength.”

More clues about the composition of comets are on the way. When Stardust zoomed by Wild 2 it mowed through a cloud of loose debris surrounding the comet. While a shield protected the spacecraft itself, a small collector scooped up bits of comet stuff. This package is now headed earthward and will arrive in January 2006 via a parachute drop reminiscent of the one used for the Genesis probe. Scientists just hope for a softer landing this time around.