Space Is Expensive. Can 3D Printing and On-Orbit Construction Drive the Cost Down? 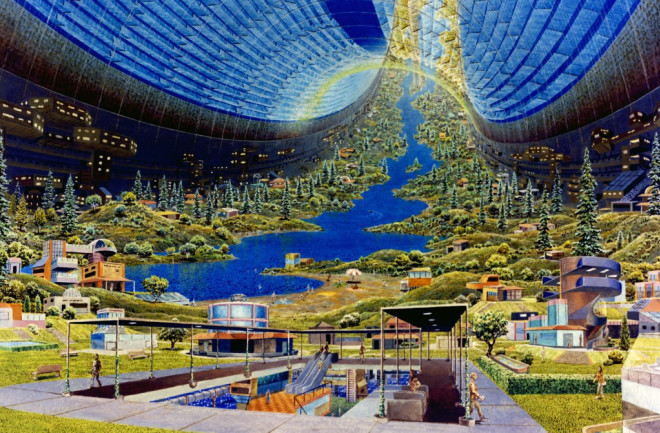 Little more than a decade ago, NASA estimated that it cost around $10,000 to launch a single pound of payload into space. Today, that price tag has fallen significantly, largely thanks to Elon Musk’s rocket company, SpaceX, as well as an explosion of other “new space” ventures likewise focused on reusability.

SpaceX, for example, recently announced that one of their reusable rockets — a Falcon 9 booster dubbed B1051 — has officially flown more times than all but four of NASA’s space shuttles. And with new, larger launch vehicles already in the works, like the company's Starship spacecraft, the cost of reaching the cosmos could drop even lower in the coming years.

But even as the price of buying a ticket to outer space plummets, would-be spacefarers still have to confront a hard fact of physics: Launching large objects into orbit takes huge amounts of fuel and giant rockets. So, even if the cost of a brief jaunt to low-Earth orbit drops to a more palatable level, more intensive activities like colonizing the Moon and Mars will still require many trips to ferry all cargo needed to keep humans alive and comfortable.

At the moment, humanity’s 21st-century approach to space travel is a bit like a turtle carrying around its home on its back. So rather than sourcing building materials for future space colonies directly from Earth, most agree it would be significantly cheaper if we instead opted to use what's already available in space.

And wouldn't you know it, a number of academic researchers and private companies are working to make that happen, exploring the utility of futuristic ideas like robots that can manufacture spacecraft parts in orbit, space-based 3D printers, and even habitats grown from fungi.

Last fall, the U.S. government announced an initiative to spur the development of new technology for servicing satellites and building spacecraft in orbit. This effort — called the On-Orbit Servicing, Assembly and Manufacturing National Initiative, or OSAM — pushes government agencies, academics, and private companies to start making significant advances in the field of outer space construction and repair.

To that end, NASA has partnered with a company called Made in Space to deploy a spacecraft called OSAM-2, formerly known as Archinaut. When it launches (as soon as 2022), the orbiting technology demonstrator is designed to 3D print two spacecraft beams that will stretch some 33 feet from its sides. Then, OSAM-2 will deploy simulated solar sails, a facsimile of a future technology that aims to generate five times more power than traditional solar panels. If it works, this tiny one-robot space factory will show it’s possible to cut costs and seriously reduce the risks of carrying prebuilt cargo to space.

NASA and Made in Space envision the tech eventually being used for everything from constructing orbiting telescopes in space to building on-the-spot structures like power grids, radar booms, and fuel depots. And those kinds of abilities would come in handy for NASA’s Artemis missions, where the space agency aims to return to the Moon and set up shop. Pulling that off will require new tools and technologies that allow us to build infrastructure on the lunar surface without lugging huge amounts of cargo with us from Earth.

NASA astronaut Butch Wilmore shows off a ratchet that was 3D printed aboard the International Space Station. (Credit: NASA)

The Refabricator: A 3-D Printer and Recycler in One

Bringing 3D printers to space isn’t a new idea. For instance, the International Space Station (ISS) has had one since 2014. And because Amazon Prime doesn’t ship to space (yet), 3D printers are extremely valuable to astronauts, who can use them to create specialty tools or random parts that they unexpectedly need.

Still, common 3D printers require you bring the raw materials for printing with you. And that's a problem for deep-space colonies, which will need to utilize only the resources they have on hand. Or will they? One NASA project has been testing a different approach: simply repurposing the materials astronauts bring with them.

The “Refabricator” on the ISS can actually recycle the tools and parts that it’s already printed, reprinting them into entirely new items. It can also use the foam and plastic used to pack space cargo as a printable material. That ability sets it apart from garden variety 3D printers, which can’t reuse plastics without significantly weakening them. The device, which is roughly the size of a minifridge, was developed for NASA by a company called Tethers Unlimited.

This strange-looking piece of astronaut furniture is a stool grown from fungi over the course of weeks. Scientists hope to eventually grow entire space habitats using this "myco-architecture." (Credit: 2018 Stanford-Brown-RISD iGEM Team)

Lynn Rothschild is an evolutionary biologist who studies the prospects of alien life, as well as ways to use Earth-based biology to improve how we build on other worlds. And in recent years, she’s been studying a bold idea that could revolutionize the future of humanity's extraterrestrial accommodations.

Instead of shipping raw materials from Earth to build bases on the Moon and Mars, Rothschild is investigating whether it’s possible to grow otherworldly habitats using fungi. At NASA’s Ames Research Center, Rothschild and a team of scientists have spent several years experimenting with how to grow the mycelia — the underground threads of fungus — in a controlled environment with a variety of different materials.

The idea is that when astronauts travel to the Moon or Mars, they’ll bring along a light, compact structure filled with dormant fungi. When they arrive, they’ll simply add water and watch the habitat grow, unfurling like a mail-order mattress freed from its box.

NASA recently gave the project another vote of confidence when it announced an additional round of funding in April. This latest support, provided by the NASA Institute for Advanced Concepts, will let the team experiment with growing the fungi in different materials, including waste products from things like paper and plastic. They’ll also test its potential as a building material within a NASA vacuum chamber that can simulate the conditions of the Moon and Mars.

And if it works well, the project could even yield revolutionary building techniques that we even adopt right here on Earth.