Soyuz Rocket Failure: What Went Wrong, and What Happens Next 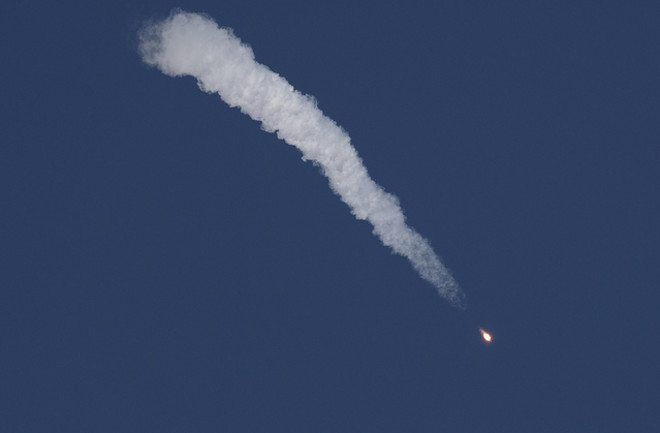 An "anomaly" occurred as the Soyuz spacecraft carrying two astronauts launched toward the International Space Station from the Russian Baikonur Cosmodrome in Kazakhstan on Thursday. The crew had to abort. (Credit: NASA/Bill Ingalls)

Two astronauts made an emergency landing this morning in Kazakhstan after a Russian Soyuz rocket failed while launching them to the International Space Station. According to NASA officials, the rocket failed in its ascent soon after liftoff and the capsule with the astronauts inside —  one Russian and one American — was sent careening back to Earth.

A search-and-rescue team reached the site quickly to get to the Soyuz MS-10 crew, leaving at 6:10 am EDT, according to NASA spokesperson Brandi Dean’s commentary on live television. Both crew members are reportedly safe and in good condition, and have already been reunited with their families.

This is the moment that astronauts Alexey Ovchinin and Nick Hague were reunited with their families at the Baikonur Cosmodrome, after a flight back from their emergency landing zone. (Credit: NASA/Bill Ingalls)

This is the moment that astronauts Alexey Ovchinin and Nick Hague were reunited with their families at the Baikonur Cosmodrome, after a flight back from their emergency landing zone. (Credit: NASA/Bill Ingalls)

The Soyuz FG rocket used in the launch malfunctioned just two minutes after liftoff in Kazakhstan. The failure forced Russian cosmonaut Aleksey Ovchinin and NASA astronaut Nick Hague to execute an emergency abort and return the few hundred miles to the launch site. “Today showed again what an amazing vehicle the Soyuz is, to be able to save the crew from such a failure. Spaceflight is hard. And we must keep trying for the benefit of humankind,” ESA astronaut Alexander Gerst tweeted from aboard the space station as he watched and photographed the launch from space.

Glad our friends are fine. Thanks to the rescue force of >1000 SAR professionals! Today showed again what an amazing vehicle the #Soyuz is, to be able to save the crew from such a failure. Spaceflight is hard. And we must keep trying for the benefit of humankind #Exp57 #SoyuzMS10pic.twitter.com/H7RmToBb5C

After the crew successfully navigated the failure and landed safely, they boarded a plane to fly back to the Baikonur Cosmodrome.

This failure comes as America is working to wean itself off of its Russian rocket dependency. For years, since NASA’s final shuttle mission launched in 2011, the U.S. has relied on Russian rockets to send astronauts to the International Space Station, which is largely funded by America taxpayer dollars.

Now, American companies SpaceX and Boeing are working to launch their first crewed missions to space. The missions both hope to launch in 2019, though they have each experienced delays thus far.

These will be the first crewed missions to launch from American soil since 2011 and, while the issues with the Soyuz MS-10 mission will likely be resolved by then, this will allow for increased access to space and reduce dependency.

NASA and Roscosmos officials say they are launching an investigation into exactly what went wrong with the rocket and why. “A thorough investigation into the cause of the incident will be conducted,” NASA Administrator Jim Bridenstine tweeted alongside an official statement on the Soyuz MS-10 Launch Abort. Officials are also investigating the strange hole recently found in a Soyuz spacecraft aboard the International Space Station.

However, in the meantime, this failure has a number of consequences for the agencies and the crew aboard the space station.

Hague was originally scheduled to participate in spacewalks in the coming weeks to replace batteries on the outside of the space station. Spacewalks take extensive, long-term planning, so the crew and their teams back on Earth will have to come up with an alternative plan. This is especially tricky, as the new batteries arrived later than expected after a series of launch delays from the Japanese cargo vehicle they were on.

It is also possible that this event could affect the next scheduled crew launch of three astronauts in December who were set to replace NASA astronaut Serena Auñón-Chancellor, Russian cosmonaut Sergey Prokopyev and Gerst.

Luckily, these crew members will not be stranded on the space station, as they will return to earth in the capsules they traveled to the station in. But exactly when the astronauts will be sent home is still unclear.

Additionally, the Soyuz rocket launches cargo ships to the space station along with crewed missions like the one this morning. The space station and its crew depend heavily on missions supported by the rocket.

While the Soyuz rocket is considered a reliable launch vehicle in the space sector, this is not the first failure in the Soyuz program’s history. In 1967, The Soyuz 1 spacecraft, which carries the same name as its launch vehicle, had a parachute failure during its first crewed mission and crashed, resulting in the death of cosmonaut Vladimir Komarov. Additionally, including today, there have been three total failed launches of a crewed Soyuz vehicle — Soyuz 18-1 in 1975, Soyuz T-10-1 in 1983 and the Soyuz MS-10 launch this morning.

Still, these failures have been few and far between.

Historically, failures have plagued many launch vehicles. SpaceX, for example, has had a number of mishaps. In 2015, CRS-7 launched a Dragon capsule on a Falcon 9 rocket to resupply the space station, but the second stage exploded. A Falcon 9 exploded later in 2016 before it had even launched. Luckily, no astronauts have been harmed in these explosions, as none of these missions have so far been crewed. But these failures have been difficult learning experiences for the company, which plans to launch its first crewed capsule in 2019.

NASA has also suffered a number of launch failures over the years. The United States’ first attempt to launch a satellite into orbit ended in failure and an explosion. Additionally, the crewless test flight for the Saturn V rocket in anticipation for the crewed Apollo 6 mission failed to complete its mission; the Challenger disaster killed all seven astronauts on board, as did the Columbia disaster.