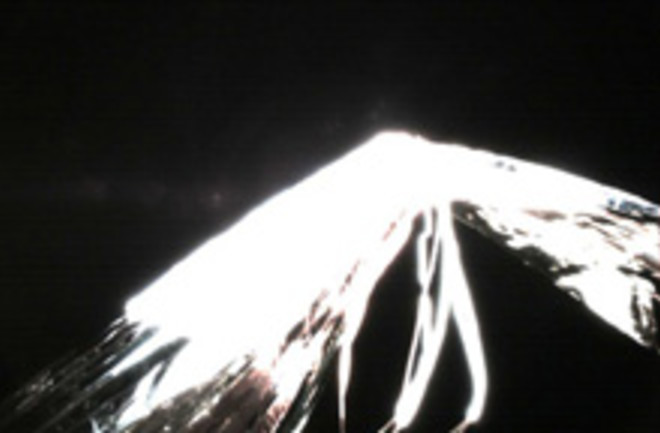 Ikaros hasn't flown too close to the sun. It's flown just close enough to ride the light. Japan's space agency JAXA confirmed on Friday that its solar sail project, Ikaros, achieved another of its goals: The sun's photons pushed against the sail and accelerated the craft.

The effect stems from the cumulative push of light photons striking the solar sail. When measured together, it adds up to a small continuous thrust that does not require fuel use by the Ikaros craft. JAXA engineers used Doppler radar measurements of the Ikaros craft to determine that sunlight is pressing on the probe's solar sail with a force of about 1.12 millinewtons (0.0002 pounds of force) [MSNBC].

in May and unfurled the sail

in June. Now, JAXA scientists say, "with this confirmation, the IKAROS was proved to generate the biggest acceleration through photon during interplanetary flight in history." Coming soon: A controlled flight in which the researchers turn the sail toward or away from the sun to control Ikaros' velocity. Check out DISCOVER on Facebook

, on the Hayabusa mission Image: JAXA