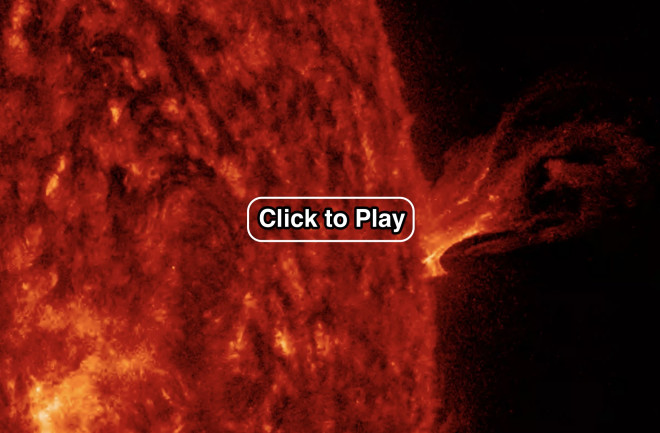 NASA's Solar Dynamics Observatory spacecraft captured this animation of a solar prominence on August 13, 2018. (Source: NASA) In my ongoing hunt for cool imagery to feature here at ImaGeo, I regularly check to see what NASA's Solar Dynamics Observatory spacecraft has been seeing on the Sun. The animation above is one of SDO's more recent captures. It shows an eruption of material rising up along invisible magnetic field lines, twisting, and then falling back down, all over a course of two hours on August 13. The feature is known as a solar prominence.

A representation of a 3D model of magnetic fields inside a solar prominence. (Source: NASA) A solar prominence occurs when two points on the Sun's photosphere — essentially its surface — inject plasma along magnetic field lines. (Plasma is the fourth state of matter. Read more about it here.) As the plasma rises up from those points, it interacts with the magnetic field lines, resulting in the twisting and turning motions. In this case, the feature collapsed back to the Sun's surface. But sometimes, the structure can become unstable and burst, propelling the plasma outward in a giant explosion. When that happens, the phenomenon is known as an eruptive prominence. Speaking of giant, in the animation above, the Earth would easily fit within the twisting loop of hot plasma. And this prominence was actually pretty minor.

A solar prominence as seen in extreme UV light, with Earth superimposed for a sense of scale. (Source: NASA/SDO) Here's an example of a much bigger prominence — an eruptive one. It was seen by SDO on March 30, 2010.

Source: NASA/SDO The Solar Dynamics Observatory observes solar prominences in extreme ultraviolet light. When viewed erupting from the limb of the Sun — the apparent edge of the Sun — they appear bright against the almost black background of space. But as it turns out, the plasma in a prominence is much cooler than the surface of the Sun. So when a prominence is viewed against the hotter solar surface, it will appear much darker. The result is a dark, snaking, filament-like structure. Click on the thumbnail image to see what that looks like. Solar activity has been falling as part of a natural cycle. Roughly a year from now, activity should begin to rise, beginning the next 11-year solar cycle. Activity will rise to a peak and then fall once again. Scientists forecast that the next solar cycle could be about 25 percent smaller than the one we're finishing now.