What's happening in space and on Earth. 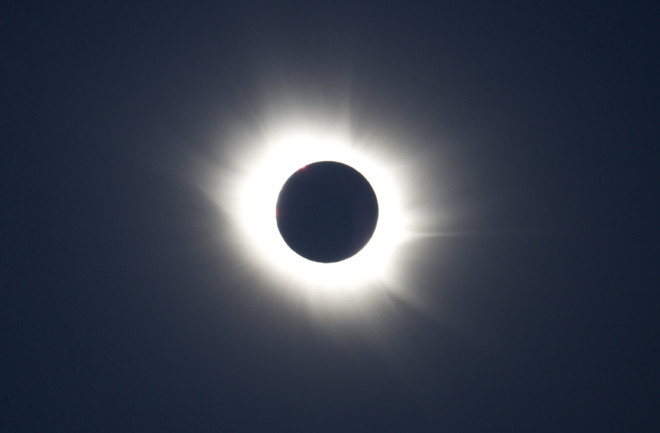 The eclipse as seen from a group’s viewing site outside Longyearbyen. (Credit: Allen Hwang)

On Aug. 21, 2017 the dark inner part of the moon’s shadow will sweep across the United States, creating a total solar eclipse for regions in 14 states. But, you may ask, the sun is so much larger than the moon, so how does this work? While our daytime star has a diameter about 400 times larger than that of the moon, it also lies roughly 400 times farther away. This means both disks appear to be the same size, so at certain times from certain locations, the moon can completely cover the sun.

Be sure to protect your eyes during the partial phases. The simplest way is to buy a pair of solar viewing glasses. Wear them even when 99 percent of the sun is covered because the remaining part is still intense enough to cause retinal burns. But remember: During the 2 minutes and 40 seconds of totality, remove any solar filters, or you’ll miss the most spectacular part of the eclipse.

If the sun were a point source, like one of the nighttime stars, the moon would cast only one kind of shadow. Instead, the sun stretches 0.5° across, so even during total solar eclipses, some of its light passes either above or below the moon, creating a less-dense shadow called the penumbra. Only where the moon blocks all the light from the sun — in its dark inner shadow called the umbra — can people on Earth see a total solar eclipse. Anywhere in the penumbra, the eclipse will be partial, but the percentage of the sun covered will increase as you get near the umbra. Unfortunately, the umbra is small, no more than a hundred miles in diameter. On the other hand, the penumbra measures more than 4,000 miles across.

The three main types of solar eclipses are total, where the moon completely covers the sun’s surface (also shown above); annular, during which the moon lies too far from Earth (or Earth too far from the sun) for it to cover the sun completely; and partial, where the lineup isn’t exact and only the moon’s outer shadow touches our planet.

When Can Eclipses Happen?

The moon’s tilted orbit intersects our orbit around the sun only twice in each revolution at points called nodes. Only when the moon lies at one of the nodes can an eclipse (solar or lunar) occur.

Some central eclipses are total and others annular because the moon’s distance from Earth changes. An eclipse doesn’t happen every new moon because our satellite’s orbit tilts more than 5° from the plane of our orbit.

Michael E. Bakich is a senior editor of Astronomy who will be hosting the world’s largest eclipse event Aug. 21 at Rosecrans Memorial Airport in St. Joseph, Mo.

This story originally appeared in print as "Solar Eclipse Geometry"