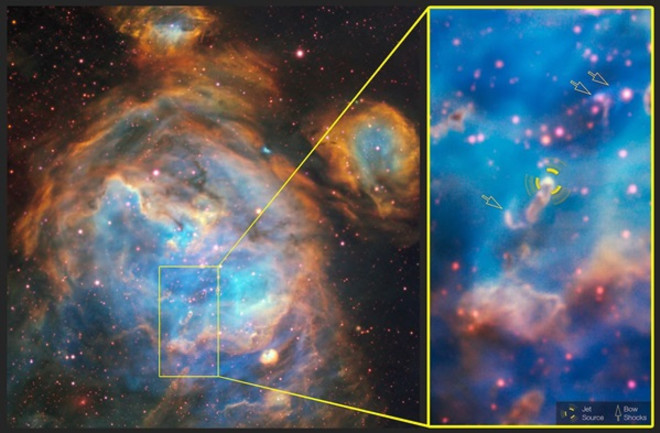 The Large Magellanic Cloud (LMC) is one of the most beautiful cosmic sights that a southern observer can take in with their naked eye. At just over 150,000 light-years from Earth, this large(ish) satellite galaxy of the Milky Way is roughly 14,000 light-years wide and bursting with newly formed stars. Recently, astronomers homed in on a particularly fertile region of the LMC named LHA 120-N 180B — informally known as N180 B. This nebula, which serves as a sort of stellar nursery, is chock full of ionized hydrogen, or H II. By studying such a glowing glob of gas, not only do astronomers gain insight into what’s going on in the area, it also makes for a particularly stunning image, like the one seen above.

The newly discovered jet, known as HH 1177, is seen here bursting from its source — a young, massive star within a star-forming region of the Large Magellanic Cloud. (Credit:ESO, A McLeod et al.)

But deep inside N180 B hides a smaller yet equally breathtaking sight. Using the Multi Unit Spectroscopic Explorer (MUSE) instrument on the ESO’s Very Large Telescope, researchers probed the nebula N180 B and spotted a fledgling star firing a huge jet into space. The jet of this young star — which is about 12 times the mass of the Sun — is nearly 33 light-years long, making it one of the longest such jets observed to date. Furthermore, this is the first time astronomers have used visible light to spot such a jet around a newly formed star — at least in a galaxy other than the Milky Way.

According to a press release from the ESO, such jets are typically found bursting from stellar accretion disks, which are chaotically swirling whirlpools of hot gas and dust that surround many young stars. By analyzing the jet, dubbed HH 1177, astronomers recognized that it’s extremely narrow, or collimated, much like a laser beam.

Though such narrow jets have commonly been observed around low-mass baby stars, very few have been found around young, high-mass stars (greater than eight solar masses) — though they have seen them before. However, by finding this rare example of a high-mass infant star shooting a powerful jet from its accretion disk, astronomers have collected yet another piece of evidence that suggests little stars are not the only ones that throw tantrums in their early years.