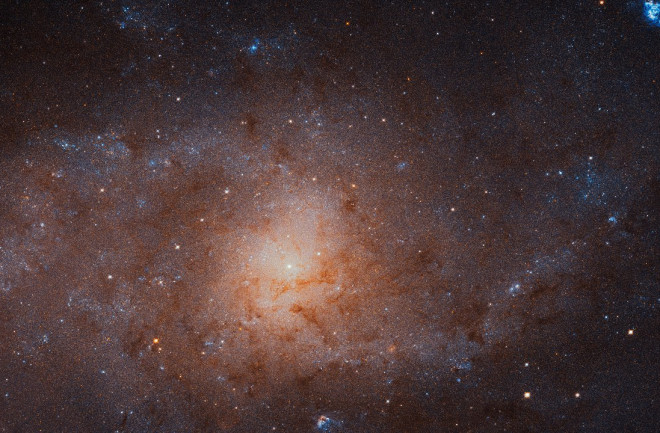 The Triangulum galaxy is seen here in the second-largest image ever taken by Hubble. (Credit: NASA, ESA, and M. Durbin, J. Dalcanton, and B. F. Williams (University of Washington)) Hubble just released its second-largest image ever: the Triangulum Galaxy, and it’s a stunner. While Andromeda has been holding the top spot since being imaged back in 2015, this ~665 million-pixel composite is nothing to sneeze at, clocking in at a staggering 34,372 x 19,345 pixels. All told that adds up to 665 million pixels. Also known as Messier 33, 40 billion stars make up this spiral galaxy, which is faintly visible by naked eye under a dark sky as a small smudge in the constellation Triangulum (the triangle.) This image spans 14,500 light-years, composed of shots taken between February 2017 and 2018 by the famous space telescope’s Advanced Camera for Surveys. The Triangulum Galaxy is small by cosmic standards, at about half the diameter of the Milky Way and a quarter of the diameter of the Andromeda galaxy. Still, the astronomers estimate there are anywhere between 10 and 15 millions stars contained in this image. Eat your heart out, David Bowman — this thing is FULL of stars! Find more great science imagery on our Instagram page.