Small, Rocky Exoplanet Is the Most Earth-Like World Ever Seen 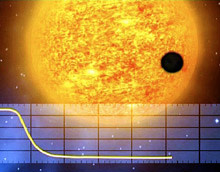 A rocky world about twice the size of Earth has been detected orbiting a sun-like star 390 light years away from our solar system. While the "super-Earth" is hot and inhospitable to life as we know it, its discovery puts researchers firmly on the path towards finding other habitable planets.

"For the first time, we have unambiguously detected a planet that is 'rocky' in the same sense as our own Earth” [Wired News],

said project scientist Malcolm Fridlund. The exciting find was made by the CoRoT satellite, which was launched by the French space agency to scan the skies for exoplanets (planets outside our solar system). The results were announced at a CoRoT symposium in Paris. CoRoT team member Suzanne Aigrain explains that the planet is so close to its parent star that it orbits around it once every 20 hours, and is subject to inferno-like conditions.

"It's likely that there is a solid surface somewhere," says Aigrain. But the extreme surface temperatures of around 1000°C [around 1800 degrees Fahrenheit] could mean that the planet is host to vast lava fields and boiling oceans. It also may be 'tidally locked' to its parent star, leaving one face bathed in constant, searing sunlight while the other is shrouded in continuous night. "It would be a very odd place to set foot on," she says [Nature News].

Astronomers have found about 330 exoplanets so far, but the majority have been gas giants like Jupiter and Neptune. That's because most exoplanets have been discovered using the radial velocity method, which looks for signs that a star is wobbling due to the gravitational pull of an orbiting planet; that

method favours the detection of large planets orbiting close to its parent star. Astronomers detected the new planet as it crossed the face of the distant "sun", dimming the star's light as it passed in front. This is known as the transit method [BBC News].

The transit of the planet, named Exo-7b, was first detected a year ago.

After COROT recorded the minieclipses —which by themselves reveal only the size of the orbiting body, between 1.75 and two times Earth’s diameter — the team followed up with ground-based measurements of the parent star’s wobble in order to determine the planet’s mass [Science News].

While researchers still don't have an exact figure for its mass, rough calculations of its size and mass allowed them to estimate its density, and to declare that it's a rocky planet similar to Earth. Related Content: Bad Astronomy: Smallest exoplanet yet found has more on this discovery DISCOVER: How Long Until We Find a Second Earth? DISCOVER: The Man Who Made Stars and Planets 80beats: First Ever Weather Report From an Exoplanet: Highs of 2240 Degrees 80beats: Dust Around Dead Stars Suggest Rocky Planets May Be Commonplace 80beats: Hubble Reports First Ever Signs of Carbon Dioxide on an ExoplanetImage: CNES