Small Eruption at Indonesia's Agung After Weeks of Unrest 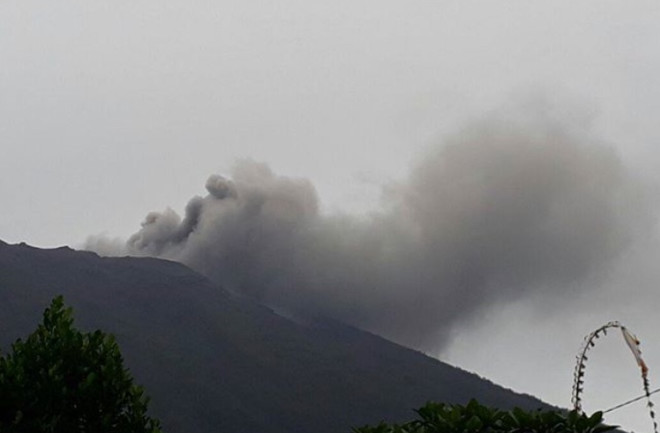 The small, dark grey ash plume from the November 21, 2017 eruption of Agung in Indonesia. Pusdalops PB BPBD Prov Bali. After weeks of unrest that has waxed and waned, Agung in Indonesia finally produced an explosive eruption today. This blast wasn't anything close to the large blast that some media organizations have been claiming, but rather a relatively small eruption (see below) that was driven by water flashing to steam at the summit crater.

Drone footage (below) taken not long after this explosive eruption shows the steaming crater. The plume is very white in this footage, suggesting it is mostly steam, lacking a large ash component (and not smoke, as many outlets report. Volcanoes don't produce smoke

Drone footage above Mount Agung at around 18:30 localtime or about 1.5 hours after the initial ash emission. Courtesy of CVGHM @GeologiBadan@KementerianESDMpic.twitter.com/HED5qM3nAg

These types of eruptions -- called phreatic -- are the product of rock that already exists being shattered violently when water heated by the rising magma under Agung quickly turns to steam. This produces a blast made (mostly) of broken pieces of old rock in the form of blocky ash rather than new magma.

Of course, to be sure, Indonesia volcanologists need to look carefully at the ash to look for any signs of more tell-tale jagged, cuspate (crescent-shaped) ash particles that represents bubbles popping in new magma. This would support the idea that magma might be very near the surface under the volcano. If you've been following the events over the last few months (likely via Dr. Janine Krippner on Twitter

), then you'd know that earthquake frequency at Agung is way down compared to early October (see below). So, why an eruption now? It could be that this is just a lonely blast that was caused by water seeping into the hot rocks at the summit, which doesn't herald any additional eruptions. However, many volcanoes start periods of more eruptions that continue new (juvenile) magma with phreatic blasts as the upper parts of the volcano system heat up.

Earthquakes at Agung in Indonesia over the past few months. PVMBG. Reports from Bali say that everyone is calm right now, as they should be. There are still over 30,000 people in shelters from the evacuation orders given during September. The BNPB (Indonesia's disaster agency) continues to maintain a 7.5-km exclusion radius around the volcano and this eruption was clearly small enough that no one is in immediate danger. The PVMBG hasn't raised the alert status

from Level 3 either, even after this blast (likely due to the lack in earthquake activity). It didn't even prompt any air travel changes

in and out of Bali. Just like before, we wait. If the earthquakes remain low, then maybe we're not seeing the start of a larger eruptive period at Agung. We just need to watch all the warning signs

that volcanoes provide. However, the Indonesian volcanologists who have been monitoring the volcano have done an excellent job, so if you are planning to travel to Bali or live on the island, pay attention to their words.