Sliding down to the carbon atom

The folks at the Genetic Science Learning Center at the University of Utah have a nifty little interactive gizmo on their web page which shows the relative sizes of small objects from a coffee bean down to a carbon atom. A slider along the bottom (or just running your mouse left/right on the graphic itself) changes the scale, so zoom in and out on the objects. You fly past a mitochondrion, E. coli, all the way down to a carbon atom. The sizes are given too. 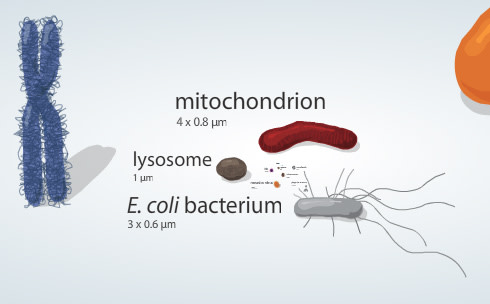 This is pretty slick, and helpful; people (me included) tend to have a miserable sense of scale. If I had two wishes for this, it would be that they included a human hair, since that's something of a standard for comparison to small things (a hair is 50 - 100 microns in diameter), and that they make the opposite one to zoom out from a coffee bean to the observable Universe. That would be pretty cool!

Note: Yes, of course I've seen "Powers of Ten". I remember the original, with Philip Morrison narrating. I used to sit in the Smithsonian on field trips when I was a kid and watch it over and over. I was always doomed to dorkhood.