It’s the third day of Shark Week, and Discovery has already come under fire for their programming choices. Their big special on kick-off night—Shark of Darkness: The Wrath of Submarine—turned out to be another fake documentary, making up people and events to perpetuate the idea that a 30+ ft long great white patrols the coast of South Africa. The legend of Submarine is a particularly fishy topic choice, as its origin can be traced to the 1970s when some journalists decided to make up a story to see how gullible their readers were. Yet again, the all-too-quick disclaimer failed to let a good chunk of the audience in on the charade, resulting in a spike in tweets like this:

Don't understand why I watch shark week because it just makes me 10x more scared of the water than I already am — Danielle (@daniellejene) August 12, 2014

This submarine shark got me all sorts of scared about going into the ocean again. — Samantha Kramer (@SamanthaKramer1) August 11, 2014

Though Monday’s Jaws Strikes Back proved worthy of the science stamp I awarded it, any respect gained by the special was quickly lost by the program that followed. Monster Hammerhead claimed to follow shark scientists as they sought to tag the legendary large hammerhead off of Florida named Old Hitler, however, fear-inducing language set the tone and the program misrepresented not only the work being done but also the animals being studied. Worse, the scientists that appeared on the show were tricked into filming.

I'm having an absurd feeling of deja vu #VoodooShark 2013. #SharkWeek never informed the scientists how this footage would be portrayed! — Jonathan Davis (@tpwdSharks_JD) August 12, 2014

@DrGuttridge it's a real shame @BiminiSharkLab research was not properly represented here. Sickening to me actually :( — Austin Gallagher (@predatorscience) August 12, 2014

Tonight, Alien Sharks 2: Return to the Abyss will hopefully show that Discovery can do a great science show about a diversity of sharks. But Lair of the Mega Shark may undermine any science credibility that Alien Sharks gives the night, and what remains on Thursday, Friday and Saturday isn’t promising. So far, Discovery defends its programming for this year’s Shark Week based on the only thing that seems to matter to them: ratings. On Monday, a Discovery press release claimed that Sunday's kick off "reels in highest ratings for Shark Week in 27 years, shattering viewership records." Their press release last year said much the same thing—that 2013 broke "26 years of viewership records." So by how much did the new mockumentary, Shark of Darkness, beat its predecessor Megalodon? It didn't, actually. The mockumentary reeled in only 3.8 million viewers and a 2.43 rating from the 'coveted' 25-54 viewership age group. Megalodon had 4.8 million and a 2.6 rating. Last year, Discovery was able to tout that the Shark Week conversation on Twitter grew 66% from the year before—this year, as Upwell demonstrates, that conversation dropped to 2012 levels.

Upwell tweeted this simple Shark Week mentions graph—the tip of each spike are kick-off day mentions, and this year was only half of last year's volume. Throughout the press release, Discovery carefully chooses their words to make the most of a bad situation, trying to avoid the fact that this year's Shark Week has taken a hit (and that's in spite of the surge in corporate sponsorship from Gillette, Cold Stone, and others). Sure, some "records" were broken, but the ones that count were not. Viewership is down. Ratings are down. Social media chatter is down, and an increasing percentage of it is negative. Almost a quarter of the comments on Discovery's Facebook page are negative, with thousands upset about faked footage, actors playing scientists, and made-up events. 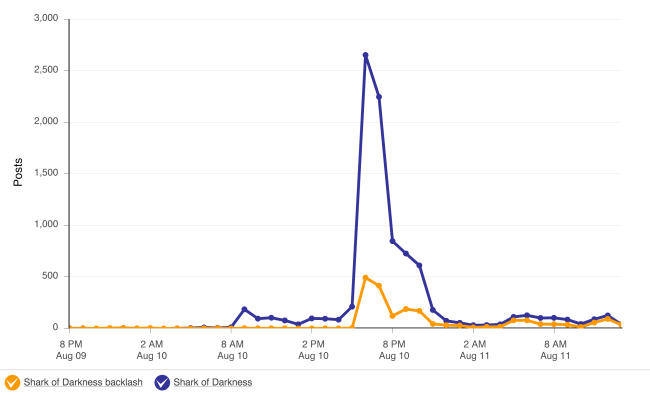 Upwell's graph shows how large a chunk of the conversation around Shark of Darkness was negative. Though Discovery seems to want to pretend everything is going swimmingly, it's clear that the backlash against their sensationalistic, unscientific programming is starting to undermine what they care about most—a fact which probably won't go unnoticed by this year's team of heavy-hitting sponsors. As viewership falls, those fancy razor ads and ice cream specials simply aren't going to get the return on investment they hoped for. In a recent interview with International Business Times, Shark Week's vice president of development and production Michael Sorensen defended Discovery's mockumentaries, including the upcoming new Megalodon special that will air on Friday after a longer version of the original. "We wanted to take the audience on different journey, tell a different kind of story," he said. He cited Megalodon's high ratings as proof of its value, and said that this year's follow up came about because of continual spikes in viewership whenever the special was replayed. Sorensen didn't seem to be worried about the channel's rising negative reputation. "In terms of working with scientists and people coming back to us [with critiques] – we want to work and we do work with the best scientists. We want them to bring their projects to us," he told IBT. Such collaborations are becoming fewer and further between. A growing number of scientists flat out refuse to work with the channel, while others are hesitant. And the recent exposure by i09 of Discovery's shady filming tactics, where they misled or outright lied to researchers about what was being filmed, only solidifies scientists’ fears that Discovery will misrepresent their work. As anyone who watched Jaws Strikes Back or Monster Hammerhead can attest, the scientists matter. What would the former have been without SharkCam? Or the latter, without the Bimini Shark Lab team’s tagging efforts? The more Discovery pushes away these scientists, the more the quality of programming is going to suffer, and the more they will stray from their mission to “make a difference in people’s lives by providing the highest quality content, services, and products.” So far, Discovery’s audience is issuing a warning: cut it out. But if Discovery keeps on this path, the real losses won’t be measured in corporate dollars. If Shark Week's audience continues to plummet, it's the sharks that will suffer most. For better or too often worse, Discovery has made sharks more talked about than ever. While their fear-based programming might not be helping the cause, Discovery does partner with conservation organizations, and the simple fact that millions are talking about sharks has given scientists and conservation organizations unprecedented access to people that care about ocean issues. Conservation International, Pew's Global Shark Campaign, Oceana, One World One Ocean and Shark Advocates International fight year-round to protect our oceans' apex predators, but they benefit from the boost during Shark Week. It's sometimes hard to convince people that these "scary" animals need our help, and Shark Week opens many doors by drumming up enthusiasm for sharks. That's why it matters so much that Discovery does Shark Week right. Discovery owes it to the sharks they exploit for profit. In an interview for Pacific Standard, shark scientists and Shark Week critic David Shiffman said it perfectly:

“The Discovery Channel has made so much of their reputation off sharks that they have a responsibility to tell the truth about these animals. They are capable of making world-class quality shows about the science behind sharks, the natural history and behavior of sharks, and conservation of sharks in a way that informs people, makes people excited to watch, and doesn’t scare or mislead.”

Discovery isn't irredeemable, however, they have shown no interest in righting the ship. They staunchly defend their poor decisions and continue to try to convince the world that they're supporting science and conservation. Perhaps now that the backlash is hitting Discovery where it hurts—their Pearson rankings—they'll start to listen to their audience.

Those of us most critical of #SharkWeek are also the most vocal about not giving up on it. We can #SaveSharkWeek. We love #SharkWeek. — Andrew David Thaler (@SFriedScientist) August 11, 2014

PS: If you're fed up with the lies and deceit, tune into National Geographic's Shark Fest instead, or this YouTube collection. Join the million or so that didn't tune into Shark of Darkness this year and vote with your viewership! Here's a quick guide for what you should watch—just stick to the science ones. Image credit: Shark Week image from the Discovery Shark Week website.