Fire investigators have long used certain rules of thumb to identify arson. Many have been proved incorrect. 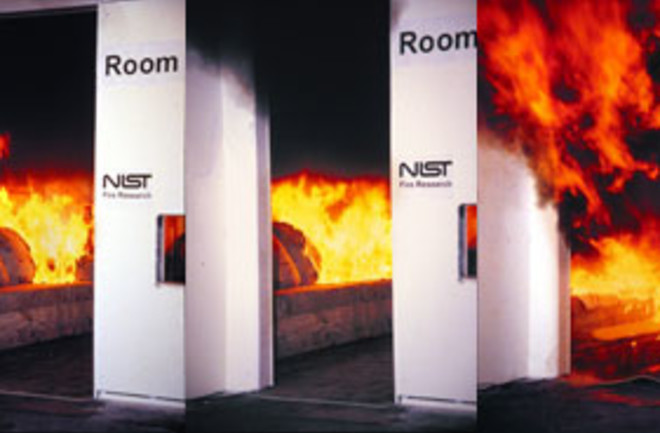 A typical flashover sequence: A fire starts on a sofa; the fire generates a hot gas layer; the hot gas layer combusts; and finally, everything ignites floor to ceiling (flashover), enveloping the room in a blaze. | Courtesy of NIST

1 Crazing of windows, in which hundreds of cracks appear in the glass, indicates rapid heating and means an accelerant was used to start the fire.

Crazing is caused by the rapid cooling of window glass, as when water from a fire hose strikes a hot window.

2 Burn marks on the floor indicate that a fire was purposely set, because heat rises and fire only burns upward. It must have been set by pouring a liquid on the ground and lighting it. REALITY: When a fire reaches flashover—the point at which an entire room ignites—extreme radiant heat will produce burn marks or even burn holes in the floor..

3 Melted metals, such as doorway thresholds, indicate that a liquid fire starter must have been used in order to reach temperatures that exceed their melting points.REALITY: Wood fires, especially those that reach flashover, frequently exceed the melting point of metals..

4 Burn marks under doorway thresholds or under furniture indicate that a liquid accelerant must have been used to start the fire, since the liquid must have been poured and then seeped. REALITY: Post-flashover fires commonly cause burning under thresholds and furniture..

6 Alligatoring, the appearance of blisters on the surface of burned wood, points to a fire’s origin. Small, flat blisters result from a slow burn; large, shiny blisters indicate rapid heating and hence the use of an accelerant. REALITY: There is no scientific evidence for any such correlation. Both types of blisters can appear on the same burned wall..

7 Sharply angled V-pattern burn marks on a wall denote a fast-burning fire that must have been started with a liquid accelerant. REALITY: Patterns can result from a number of factors, including ventilation, air currents, location of fuel, and the materials burning objects are made of.