Set aside since the 70s, the pristine sample container holds clues to the moon's past and future. 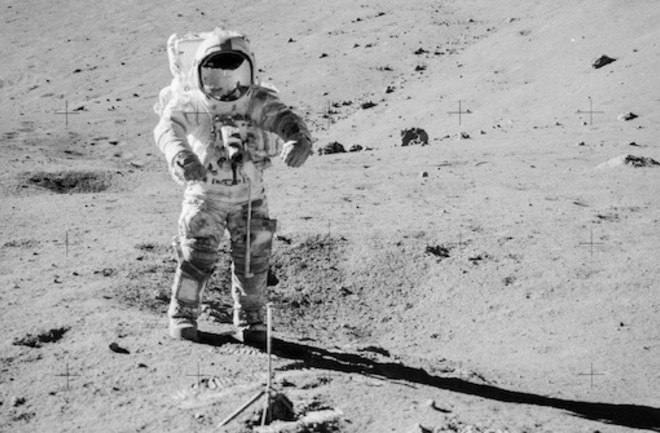 In 1972, when geologist and Apollo 17 astronaut Harrison Schmitt spotted a patch of unusual orange soil on the moon, he knew it was special, but he wasn’t sure exactly why. “Until it was possible to look at this material in the laboratory under high resolution and analyze it, we did not know that we had found a deposit of volcanic ash,” he says.

Fifty years later, Schmitt still isn’t aware of all the discoveries his mission will yield. That’s because researchers in the Apollo Next Generation Sample Analysis (ANGSA) program are only recently beginning to study lunar samples that had been saved for future scientists. Their projects aim to answer critical questions about the moon’s past and, as the Artemis program prepares for launch in the next few years, lunar exploration’s future.

Apollo 17’s sample 73001, which was collected from a pile of debris deposited by a lunar landslide, will be opened for the first time in the coming weeks, says ANGSA researcher Charles Shearer, a research scientist at the University of New Mexico and a visiting researcher at the Lunar and Planetary Institute. This sample was stored in a Core Sample Vacuum Container (CSVC), an elaborate air-tight apparatus whose penetration has been plotted for over a year. Sample 73001 is especially valuable because it has been sealed in such a pristine state, Shearer says. “Many of the other Apollo samples may have had various amounts of contamination from Earth, so we lose part of the lunar fingerprint,” he says.

Schmitt, who is actively involved in the ANGSA program, feels “admiration for the people 50 years ago that decided to preserve a few of the samples in anticipation of the technology advancing significantly over time.” Using modern tools to analyze 73001 will provide both information and experience handling lunar samples that will benefit upcoming missions, he says.

Schmitt and Shearer will help measure 73001’s lunar volatiles — easily vaporized chemical elements that are embedded into the moon’s soil. Using a relatively new technique that identifies each substance in a material by its mass, the team can measure the volatile elements and additional compounds that decay over time in the sample. Collectively, this data provides clues as to when and how the landslide occurred — for example, whether it was caused by a seismic or an impact event. Solving the landslide mystery could also help predict the safety of human settlement on the moon, Shearer says. “Are there going to be any sort of tectonic- or earthquake-related activities that could threaten human activities on the moon?” he says. “Perhaps this will shed some light on that.”

The researchers are also interested in understanding how lunar volatiles can be used as a resource to support human presence on the moon. “In the past, when Apollo went to the moon, we took everything with us,” Shearer says. Eventually, however, astronauts might be able to “partially live off the land” when exploring and even venturing beyond the moon, he says. For example, hydrogen and oxygen serve as the building blocks of water, and hydrogen and a light version of helium might be used as a rocket fuel source to power further space travel.

Another ANGSA team is led by Darby Dyar, a professor of astronomy at Mount Holyoke College who studied the orange soil sample as a graduate student. As an ANGSA researcher, she is characterizing volcanic glass beads in other samples to better understand the composition of the lunar interior. These pyroclastic glasses, which are smaller than a grain of salt and make up about 20 percent of the soil on the moon, shoot out from the lunar interior during volcanic eruptions. “It’s like drilling into the moon,” Dyar says. “Tiny glass samples, but giant scientific impact.”

Dyar is examining the water and oxygen content of the glass beads as a record of the environment of the lunar interior. Dyar and other researchers’ work suggests the inside of the moon is not dry and oxygen-free as it was long assumed to be, challenging scientific understanding of how the moon formed. “We're kind of groping our way backwards through prior misconceptions about the lunar interior,” she says.

While ideally the volcanic glass perfectly captures the conditions of the lunar interior, gas might seep into or out of the bead as it is expelled. To account for this effect, Dyar and her team take measurements at defined increments across the surface of the bead, generating a map showing any gradients that developed as it cooled. Instruments with this degree of spatial resolution weren’t available when Dyar first started her research. “New technology is providing me with a way to answer a question that I personally posed 40 years ago,” she says.

Similarly, the electronic state of the metal atoms in the bead, which provides a measure of oxygen, can change after the eruption. Charged particles in solar wind might interact with the glass on the surface of moon, or oxygen on Earth could react with the bead after it is returned from space. Analyzing samples like 73001 that were collected from deeper in the lunar interior and stored in preservative contraptions can help pinpoint transformations due to exposure to the lunar surface or Earth, Dyar says.

This comparison of different storage methods provides valuable insight for the return to the moon, says James Head, a professor of geological sciences and Earth, environmental and planetary sciences at Brown University, who is not part of the ANGSA program. “Are we designing these sample containers correctly? How can we better design the ones that are going to be used in Artemis to make sure that they’re as pristine as possible?” he says.

Furthermore, by reconstructing the various lunar processes that left their mark on these samples, the research at ANGSA helps complete the picture of the history and evolution of the moon, Head says. “Each approach, like the landslides and the pyroclastic glasses, will fill in a little piece of the puzzle,” he says.