You break it, he fixes it. Scientific glassblower Neal Korfhage discusses the past, present and future of his unusual occupation. 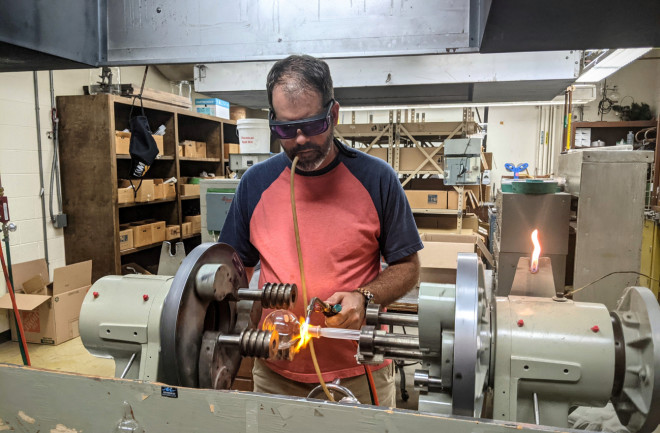 Scientific glassblower Neal Korfhage demonstrates his skills in the glass shop at the University of Wisonsin-Milwaukee. (Credit: Marisa Sloan/Discover)

Although much of the University of Wisconsin-Milwaukee’s chemistry building remains mostly undisturbed over the summer, the same cannot be said of the glass shop hidden deep within its basement. One afternoon, a graduate student drops off a cardboard box of seemingly infinite broken glassware: round-bottomed flasks and Schlenk flasks, condensers and chromatography columns. A crack here, a missing component there — occasionally two pieces that were accidentally glued together via the intense heat used in a chemical reaction.

As each passes under his eye on its way to the workbench, Neal Korfhage, the university’s lone scientific glassblower, nods and remarks, “I can do that.”

Glassware is an essential tool in nearly every government, academic and industrial laboratory around the world because it's transparent, sturdy and resists damage from most chemicals. But when mass-produced pieces crack under pressure or simply won’t suffice for the experiment at hand, scientists turn to skilled artisans called scientific glassblowers to manipulate them into different (often more complex) dimensions.

It isn’t a new gig. The earliest known man-made glass creations, including glaze tiles, figures and beads, were forged by the ancient Egyptians around 1500 B.C. But the convergence of science and artistry that characterizes modern scientific glassblowing didn't occur until just after the Renaissance, when astronomers crafted curved glass lenses to more clearly view the heavens; the first microscopes have a similar history. Even Thomas Edison required the skills of a glassblower to create a glass bubble for his experimental light bulbs.

Korfhage entered the scene 25 years ago as a scientific glassblower for the chemical company MilliporeSigma in Milwaukee. Among other apparatuses, he created gigantic, 72-liter flasks — about half the size of a typical bathtub — for transporting the chemicals necessary in large-scale industry reactions. Nowadays, he primarily assists graduate students and professors with projects both big and small.

Q: What sparked your interest in scientific glassblowing? I have a feeling this is a fairly niche career.

A: Well, there were always two things I believed I was good at. One was the physical sciences, and the other was working with my hands — like, say, fixing lawn mower engines. That was something my dad and I did together. I grew up with my dad, who was a scientific glassblower at a chemical manufacturer called Albemarle Corporation for about 40 years. He also had a little glass shop attached to our house, with a torch and lathe and stuff like that, where he did repair work for other companies outside his nine-to-five. (He loves what he does, but really it was for extra money.) So I grew up watching him and eventually, once I had reached high school and was trying to figure out what I wanted to do as a career, it just clicked for me.

Q: What is it about this career that continues to draw you in?

A: It’s both a science and an art, so it’s the best of both worlds. It does have a form and design to it that’s beautiful, but its function is for a scientific cause. Take, for example, this oil diffusion pump that I made. If I heat up the silicone-based oil inside, it boils up through the center of the apparatus and hits these inner hats, or umbrellas. The oil jets out of two-millimeter gaps and bumps nearby air molecules toward an attached mechanical pump, creating a stronger vacuum than the pump could make by itself. This unit is used mostly by the physics department, which has been working on nanoparticle research. I put their samples under a vacuum so they can heat them to oblivion and analyze the [resulting] crystals for superconductivity.

This took about 40 hours to finish, multiple days for each stage, and I appreciate that I can see everything going on. I can see the oil dripping down like a fountain and see the pressure gauge getting lower. I can actually see how what I made works. And if it works, great. If it doesn’t, back to the drawing board. You can build whatever kind of system you want. The only limit to your imagination is what you want to accomplish in science … and your skill.

Q: Speaking of skills, how do you see the future of scientific glassblowing playing out?

A: Scientific glassblowing’s heyday was post-World War II, when every chemical firm and research industry had a glassblower — or multiple glassblowers. [Chemical behemoths] Dow and DuPont used to have a whole team of glassblowers working for their scientists. But since the ‘80s, or at least the early ‘90s, it has gone through a massive contraction. Here’s the reality: The American Scientific Glassblowers Society has slowly shrunk from almost 1,000 members to probably 300. And there’s only one school in the United States that teaches the trade: Salem Community College, in a little city called Carney's Point, New Jersey. From where we’re standing right now, it doesn’t look good. The scientific industry has changed and everybody wants to make sure they’re counting all their pennies.

Q: As the industry grows reliant on mass production and sourcing from overseas, are you concerned that glassblowing skills like yours will eventually be lost to time?

A: I don’t think it’ll ever die out because chemists will always break glassware! When I was in school, I had a friend whose dad was worried that robots or artificial intelligence — like something out of Terminator 3 — would take over all of glassblowing. But if an AI was going to take over, it would need an intelligence of that level. The advantage to having a person like me here at the university is I actually support the research that the students are doing. This job may become more and more specialized, but I don’t think it will ever completely go away.