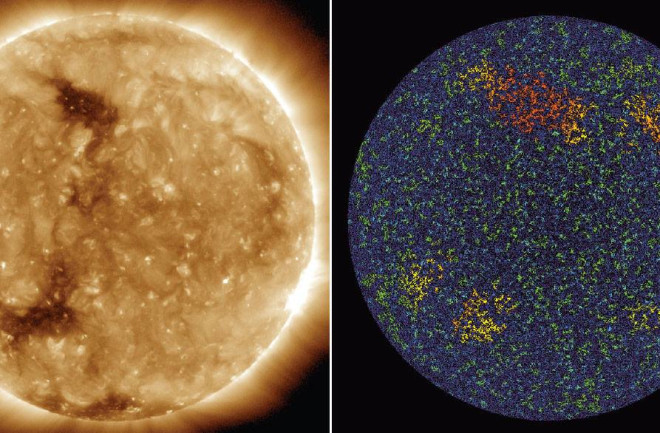 These two images were acquired by NASA's orbiting Solar Dynamics Observatory in 2010. The image on the left shows the sun's extended outer atmosphere, called the corona. The image on the right is a kind of magnetic map that reveals fingerprints of what's going on deep inside the sun. (Source: NASA Solar Dynamics Observatory Little SDO Facebook page) If solar physicists could only see deep inside the sun, they could discern the source and evolution of profound magnetic forces that produce explosions of solar material from the surface — explosions that can later wreck havoc on power grids and telecommunications systems here on Earth. Direct observation is impossible. But the sun's internal activity does affect what can be seen at the surface. And now, researchers have reported that they've spotted new evidence for gargantuan cells of slowly moving material that may reach a third of the way down to the sun's thermonuclear core.

Granules speckle the visible surface of the sun. (Source: Wikimedia Commons) Scientists have long known that the magnetic fields threading an ocean of boiling plasma inside the sun leave fingerprints on the visible surface. These magnetic fingerprints on the sun's photosphere include "granules," material welling up from the interior that are up to a thousand or so miles across. There are also "super-granules," which are roughly twice the diameter of our planet. (Click on the thumbnail-sized image at right for a comparison illustrating the size of granules.) Since 1968, much larger cells of moving solar material have been theorized to exist. Roughly the size of Jupiter, they have been difficult to spot because the material in these gargantuan convection cells moves at very slow speed — at about 8 meters per second. Compare that to material in granules, which can race along at speeds of up to 3,000 meters per second.

Map of surface movement of solar material in giant convection cells. (Source: David Hathaway/NASA) Last December, solar physicists led by David Hathaway of NASA’s Marshall Space Flight Center in Huntsville, Alabama reported that they had found the best evidence yet for the even larger cells of material. They did it using long-term observations by NASA’s orbiting Solar Dynamics Observatory. (Click on the thumbnail at left for a map of what they found.) Now, researchers have used a different technique that takes much less time to identify the giant cells of material. Led by Scott McIntosh of the National Center for Atmospheric Research in Boulder, Colorado, the scientists used a device on the SDO spacecraft to map the magnetic fields that are woven throughout the sun, and all around it. The pair of images at the top of this post, from NASA's Little SDO Facebook page, illustrate what they found. The image on the left, acquired by SDO in 2010, shows the sun's extended outer atmosphere, called the corona. It has a temperature of millions of degrees, but it is very tenuous. The large dark areas are coronal holes, areas of the corona where the plasma is colder and darker. The image on the right, acquired at the same time, is a kind of magnetic map of the photosphere. (It's called a "magnetic range of influence" map, or "MRoI.") The large reddish and orange patches in that image are areas associated with the coronal holes, as well as regions of heightened solar activity. But it was the widely distributed green patches that caught the researchers' eyes. These appear to be the magnetic signature of the much larger cells of slowly moving material. (They also seem to be associated with ubiquitous spots of extreme ultraviolet and X-ray light known as "brightpoints.") Robert Leamon of Montana State University and a co-author of the study, has a neat way of visualizing what's going on. Think of the little green blobs on the map as being like balloons, he says:

Imagine a bunch of helium balloons with weights on them. The weights get carried along by the motions at the bottom. We can track the motion of the helium balloons floating up high and that tells us what's happening down below."

By down below he means deep into the convection layer of the sun, which extends a third of the way down toward the center. Here the unimaginably intense heat from the nuclear reactions at the Sun's core is carried toward the surface through convection. In their paper, published in the April 1 issue of The Astrophysical Journal Letters, the researchers offer a vivid description of this hidden portion of the sun, as well as its connection to the "heliosphere," the magnetic bubble that envelopes our entire solar system and extends well beyond the orbit of Pluto:

The region of the solar atmosphere that is hidden from direct observation by its profound optical depth — the Sun's convective interior— is an ocean of boiling, bubbling plasma sustained from beneath by a rotating, nuclear furnace. The convective layer that forms the last third of the solar interior masks the process, or processes, that govern the production and perpetual eruption of the Sun's ubiquitous magnetic field — the magnetism that shapes the heliosphere [and] moderates the energy used to fill it, in addition to providing the energy necessary for life on our planet. Probing that ocean, and understanding the magnetism of the solar interior, its production, evolution, and eventual destruction, is a huge challenge and is the primary scientific focus of our community.

The research may also have practical significance. The scientists write that their method may "offer the potential for a near-real-time mapping of the Sun's largest convective scale," which in turn could lead to better predictions of potentially disruptive solar activity.