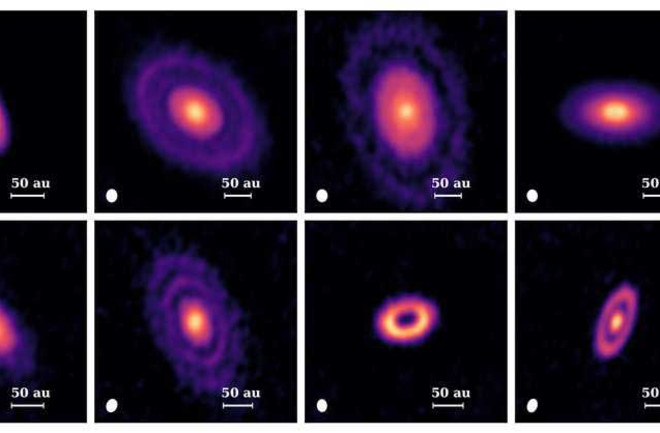 A new study shows that many protoplanetary disks are made up of a series of rings separated by gaps. According to the study, the rings are likely carved by planets. (Image: Feng Long)

In a vast cloud of dust and gas 450 light-years from Earth in the Taurus constellation, scientists have found evidence of a treasure trove of super-Earths and Neptune-sized planets.

Using the Atacama Large Millimeter Array (ALMA) in Chile, a team of researchers conducted a study of young stars in a gaseous, star-forming region of Taurus. The team observed and imaged 32 stars in the region that are surrounded by protoplanetary disks — rotating disks of dust and gas that surround young stars and often develop objects like planets.

The team found that 12, or 40 percent, of the stars they studied had disks with rings separated by gaps. Until recently, these disks were thought to be fairly smooth, flat and featureless. This new study shows that some disks may be evenly dispersed, but even more are made up of rings and gaps. According to these researchers, these features were most likely carved out by developing, or nascent, planets.

“Since most of the current exoplanet surveys can’t penetrate the thick dust of protoplanetary disks, all exoplanets, with one exception, have been detected in more evolved systems where a disk is no longer present,” the paper’s second author Paola Pinilla, a NASA Hubble Fellow at the University of Arizona’s Steward Observatory, said in a statement. But this study showed that it is possible to peer through the thick gas and dust in a protoplanetary disk to find planets indirectly through the path their orbits leave.

Previously, scientists have observed bright protoplanetary disks with rings and gaps. But, until now, scientists have focused only on bright objects because they are easier to see. These new observations are the first in which the targets were chosen without researchers knowing if the objects were bright or if there were any gaps or rings present.

After studying and observing the disks and their features with ALMA, the team analyzed this data to try and figure out what could have created the rings and gaps. There are a number of explanations for why a protoplanetary disk might have these features. After analyzing the data, the team ruled out the possibility that the rings and gaps were caused by ice lines, which are pressure changes created by chemical variations in the disk’s dust particles. “Our findings leave nascent planets as the most likely cause of the patterns we observed, although some other processes may also be at work,” Pinilla said in the statement.

By performing calculations, the team then estimated that the planets forming in this region of Taurus are likely mostly Neptune-sized gas planets or super-Earths, which are terrestrial planets up to 20 times Earth’s mass. The researchers think that only two of the disks observed could potentially host a massive gas giant like Jupiter.

“This is fascinating because it is the first time that exoplanet statistics, which suggest that super-Earths and Neptunes are the most common type of planets, coincide with observations of protoplanetary disks, Feng Long, lead author and doctoral student at the Kavli Institute for Astronomy and Astrophysics at Peking University in Bejing, said in the statement.

“Our results are an exciting step in understanding this key phase of planet formation. And, by making these adjustments, we are hoping to better understand the origins of the rings and gaps,” Long said.

An electronic preprint of this work is available at the arXiv, and it was published in the Astrophysical Journal.