Found in Portugal, the fossilized dino appears to be a sauropod, one of the largest animals to live on land. 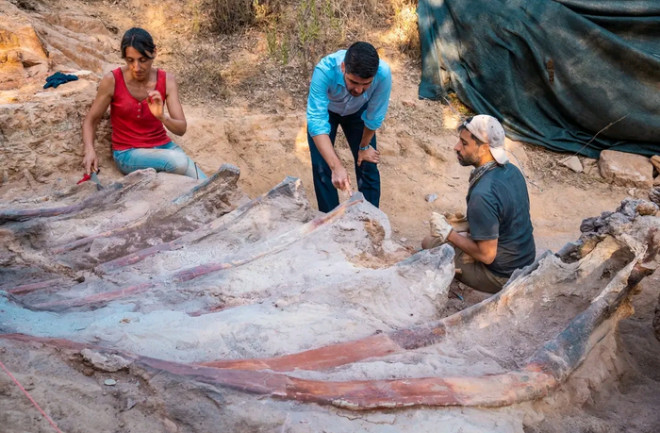 Between 1-10 August 2022, a team of Portuguese and Spanish paleontologists has been working at the paleontological site in Pombal, Portugal. (Credit: Instituto Dom Luiz, Faculty of Sciences of the University of Lisbon)

Fossil find after fossil find has shown that dinosaurs were a wide variety of shapes and sizes, with some of the most substantial morphological variations of any animal in the terrestrial world. While the largest towered over the treetops, the smallest resembled nothing more than tiny, scampering lizards, not a full inch from tip to tail.

According to a press release, paleontologists have found the fossils of what appears to be the biggest dinosaur ever discovered in Europe. Probably a sauropod, the dinosaur stood approximately 40 feet tall and spanned approximately 80 feet long.

Around five years ago, after the sighting of several fossilized fragments on a private property in Pombal, Portugal, a team of scientists started their search. This August, they found the fossilized ribs of a large sauropod — a long-legged, long-necked dinosaur with a love of leafy greens. As they continued their digging, they soon realized that they had discovered the largest dinosaur in Europe.

“The research,” says Elisabete Malafaia, a paleontologist at the site and the University of Lisbon, in a press release, “confirms that the region of Pombal has an important fossil record of Late Jurassic vertebrates, which in the last decades has provided the discovery of abundant materials very significant for the knowledge of the continental faunas that inhabited the Iberian Peninsula at about 145 million years ago.”

At this point, paleontologists have uncovered a large portion of the axial skeleton, including the trunk of the vertebrae and the ribs. The structure of the uncovered portion suggests that the sauropod may have belonged to the brachiosaurid grouping, a genus that lived around 160 to 100 million years ago and possessed a steeply inclined trunk, as well as a set of longer forelimbs than hindlimbs.

“It is not usual to find all the ribs of an animal like this, let alone in this position, maintaining their original anatomical position. This mode of preservation is relatively uncommon in the fossil record of dinosaurs, in particular sauropods, from the Portuguese Upper Jurassic,” Malafaia says in a press release.

According to the team, the positioning and preservation quality of the fossils suggest that additional portions of the sauropod skeleton may remain in the surrounding sediment, waiting for future digs to reveal.