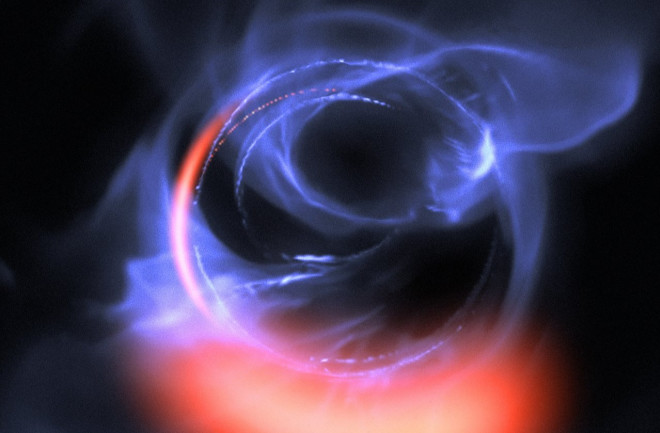 Using the ESO’s sensitive GRAVITY instrument, researchers have confirmed that the enormous object at the heart of our galaxy is, as scientists have assumed for many years, a supermassive black hole. (Credit: ESO/Gravity Consortium/L. Calçada)

Scientists have finally confirmed that the massive object at the heart of our galaxy is, in fact, a supermassive black hole.

Researchers used the European Southern Observatory’s sensitive GRAVITY instrument on the Very Large Telescope (VLT) to observe infrared radiation flares coming from the accretion disc around Sagittarius A* — the massive object at the center of our galaxy. Scientists think that most galaxies have a supermassive black hole at their center, but they’d never before had the data and observations to prove it.

To measure the effects of gravity near to a black hole, scientists needed to observe an object actually traveling close to it. They found their mark in a small star called S2, whose orbit takes it deep within Sagittarius A*’s gravity well every 16 years. As they watched, they saw three bright flares traveling around the black hole’s event horizon at about 30 percent of the speed of light — around 216 million miles per hour.

It’s exactly what Einstein’s theory of general relativity predicts would occur when a hot spot (like S2) passes close to a black hole weighing as much as 4 million suns, and the observation helps to confirm that it’s really there.

“We were closely monitoring S2, and of course we always keep an eye on Sagittarius A*. During our observations, we were lucky enough to notice three bright flares from around the black hole — it was a lucky coincidence!” Oliver Pfuhl, a scientist at the Max Planck Institute for Extraterrestrial Physics (MPE) in Garching, Germany, said in a statement.

“It’s mind-boggling to actually witness material orbiting a massive black hole at 30% of the speed of light. GRAVITY’s tremendous sensitivity has allowed us to observe the accretion processes in real time in unprecedented detail,” Pfuhl said in the statement.

For a long time, scientists have assumed that a supermassive black hole exists at the heart of our galaxy and most other galaxies. But these observations mark the first time scientists can confirm their long-held theory.

“This always was one of our dream projects but we did not dare to hope that it would become possible so soon … the result is a resounding confirmation of the massive black hole paradigm,” Reinhard Genzel, of the MPE, who led the study, said in the statement.