Scientists Are Beginning to Understand How The Universe's First Stars Exploded 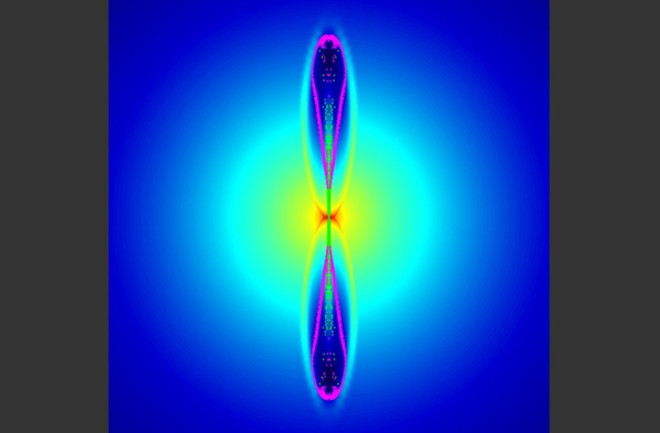 This simulation shows what the universe's earliest supernovas may have looked like. The above snapshot, which shows the shape of the supernova 50 seconds after its initial explosion, highlights two powerful jets that spew heavy elements like zinc (green dots) far out into space. (Credit: Melanie Gonick)

The universe's first stars were extremely hot and incredibly large, often reaching hundreds of times the mass of the Sun. And because they formed just a few hundred million years after the Big Bang, these boiling behemoths contained virtually no elements heavier than hydrogen and helium, which were the only materials readily available at the time.

But due to their sizeable stature, the first stars also lived fast and died hard — lasting only a couple million years before they exploded as powerful supernovas. As these first stars quickly burned through their fuel, they forged lighter elements into heavier ones like carbon, iron, and zinc.

Then, during their dramatic death throes, they blasted their guts outward into space, seeding the next generation of stars with heavy elements. And although astronomers have yet to directly detect any these early giants, they have found evidence for their existence.

Now, new research published this week in The Astrophysical Journal suggests these blazing beasts were special for another reason: When they exploded, they didn't just go off as normal, spherical supernovas. Instead, the explosions sported violent jets that spewed out material at upward of 90 million miles (145 million kilometers) per hour — or about 13 percent the speed of light.

These jets, the researchers say, allowed some of the heavy elements (called metals) trapped inside the stars to make their way to neighboring galaxies, including the fledgling Milky Way.

“This is the first observational evidence that such an asymmetric supernova took place in the early universe,” lead author Rana Ezzeddine, a researcher at MIT, said in a press release. “This changes our understanding of how the first stars exploded.”

A Diet High in Zinc

To carry out the study, researchers used the Cosmic Origins Spectrograph on the Hubble Space Telescope to investigate a peculiar star known as HE 1327-2326, located some 5,000 light-years away in the Milky Way's halo.

"The smaller stars that formed as the second generation are still available today, and they preserve the early material left behind by these first stars," said physicist Anna Frebel of MIT, who discovered HE 1327-2326 back in 2005. "Our star [HE 1327-2326] has just a sprinkle of elements heavier than hydrogen and helium, so we know it must have formed as part of the second generation of stars.”

In this case, "a sprinkle" might be an overstatement. Until 2014, HE 1327-2326 held the title of the star with the lowest known abundance of iron — a common indicator of the overall amount of metal in a star. In fact, HE 1327-2326 contains several hundred thousand times less relative iron than the Sun.

But despite its iron deficiency, the researchers found HE 1327-2326 has a surprisingly amount of zinc. “I remember getting the data, and seeing this zinc line pop out, and we couldn’t believe it, so we redid the analysis again and again,” said Ezzeddine. “We found that, no matter how we measured it, we got this really strong abundance of zinc.”

As previous studies have shown, extremely metal-poor stars with very little iron often show a relative surplus of zinc, and this is especially true for HE-1327-2326. (Credit: Ezzeddine et al. 2019 The Astrophysical Journal)

After confirming HE 1327-2326 is packed with zinc, the researchers set out to determine why. To do so, they carried out tens of thousands of simulations of Pop III stars exploding and seeding the next generation of stars. Although there were a number of spherical supernovas simulations that accurately reproduced the extremely low iron content seen in HE 1327-2326, none of them were able to replicate the observed zinc signal. This effectively eliminated the possibility that a spherical supernova fed HE 1327-2326 its extra zinc.

Instead, they concluded the only likely way HE 1327-2326 could only have acquired so much zinc, while simultaneously having so little iron, is if the original Pop III star exploded asymmetrically, launching out its zinc with tremendously powerful jets.

“When a star explodes, some proportion of that star gets sucked into a black hole like a vacuum cleaner,” said Frebel. “Only when you have some kind of mechanism, like a jet that can yank out material, can you observe that material later in a next-generation star. And we believe that’s exactly what could have happened here.”

But these Pop III supernovas are not just special because they generated jets, they also packed a bigger punch than most of the supernovas we see today.

“We found this first supernova was much more energetic than people have thought before, about five to 10 times more,” said Ezzeddine. "In fact, the previous idea of the existence of a dimmer supernova to explain the second-generation stars may soon need to be retired."

"The working hypothesis is: maybe second-generation stars of this kind formed in these polluted virgin systems, and not in the same system as the supernova explosion itself, which is always what we had assumed, without thinking in any other way," said Frebel. "So, this is opening up a new channel for early star formation.”