[Update added below. Further update: here's the video.] I'm participating this afternoon in an intriguing event here at Caltech:

Affirming the proposition will be Skeptics Society president Michael Shermer and myself, while negating it will be conservative author Dinesh D'Souza and MIT nuclear engineer Ian Hutchinson. We'll go back and forth for about two hours, after which Sam Harris will give a talk about his most recent book, Free Will. 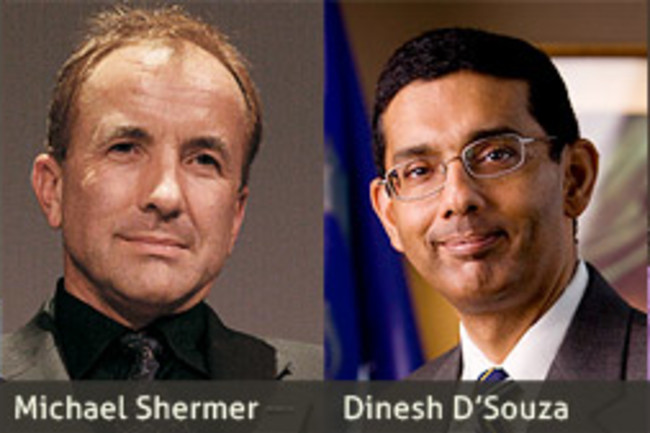 Festivities begin at 2pm Pacific time (5pm Eastern). I hadn't previously mentioned the debate here on the blog, because tickets sold out pretty quickly, and it didn't seem right to taunt people by mentioning an event they couldn't come see. But the Skeptics folks have been working hard to set up live-streaming video of the event, and it looks like they've succeeded! So you should be able to watch all the fun live on YouTube -- and feel free to leave comments here.

I'll come back when it's all over and add some post-debate thoughts. Update after the debate: first off, very sorry that the live stream didn't seem to work for many people. (Although the YouTube comments are occasionally funny.) That's just what sometimes unfortunately happens when you try something new. Pretty sure that video will eventually be available, I'll link when it appears. Also I deleted a bunch of comments about string theory from people who don't take instructions well. As for the debate, it's very hard to judge when up on the stage, but I hope there were some enlightening moments. I'm not sure it worked well as a "debate." I tried to engage a bit with what Ian and Dinesh were saying, but I didn't feel that they reciprocated -- although they might make the same claim about our side. I'm thinking that four people is just too much to have in a debate; it could have been more direct confrontation if there had only been two, with twice as much time for each little speech. I don't think I did a very good job in the cross-examinations, but hopefully the actual speeches came across clearly. The audience was pretty clearly biased toward us from the beginning. Which is great in some sense (go forces of reason!) but I'd actually like to do something similar before an audience that was tilted the other way, or (best of all) completely uncommitted at the start. Preaching to the choir is fun, but doesn't really change the world. We had a great crowd, and I very much appreciate everyone who braved the not-that-great-by-Southern-California-standards weather. Would love to hear reactions from people who were actually there.