Saturn From the Top Down

Our image of the year shows the planet from a striking new perspective. 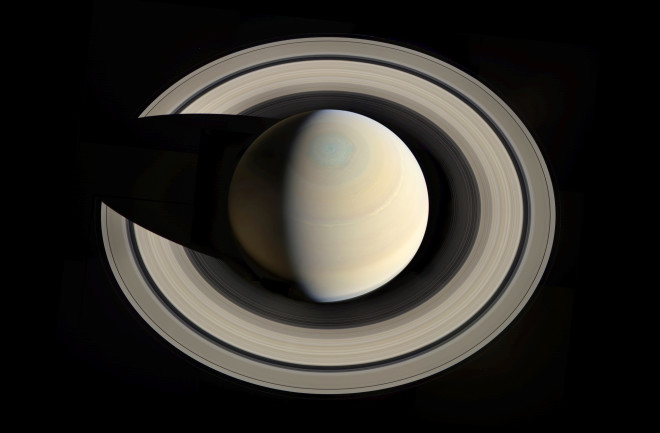 This spectacular vista, shot by the Cassini spacecraft, shows Saturn’s northern hemisphere and its rings from a top-down perspective, a view impossible from Earth. The picture is a combination of a dozen image footprints taken on Oct. 10, during the partial government shutdown that forced most NASA employees off the job.

But Cassini, obeying only the laws of physics and its programming, kept snapping photos and relaying them to a Jet Propulsion Laboratory website. Gordan Ugarkovic, a software developer in Croatia, knew where to find them. In his spare time, Ugarkovic likes to work with unedited and publicly accessible NASA images. “I don’t do image processing professionally, this is just a hobby of mine, but I’ve been doing it for several years now,” he said.

After downloading the images, he assembled them into one large mosaic using Adobe Photoshop. He posted the final stunning image to an online forum run by the non-profit Planetary Society, an organization that promotes space exploration. The photograph went viral after senior editor and planetary evangelist Emily Lakdawalla posted it on her blog and Twitter. At Discover, we were so impressed that we judged it our favorite science image of 2013 and placed it on our cover.

The image was noticed at JPL too, said spokesperson Jia-Rui Chong Cook. Soon after NASA employees returned from furlough, Cook worked with Ugarkovic to gather more information about his mosaic, featured as NASA’s Astronomy Picture of the Day on Oct. 21.

“One of the great joys of working on Cassini is getting a first look at the beautiful images the spacecraft sends down of the most photogenic planet in the solar system,” said Earl Maize, Cassini program manager. “We’re a publicly funded mission, so we think it’s important to share that excitement with the public as quickly as we can. Processing the raw images can be very challenging and the mission is delighted when fans of Cassini step in, have a go at processing the images themselves and awe others with their work.”

[This article originally appeared in print as "Saturn From the Top Down."]