Salts on Mars Are a Mixed Blessing 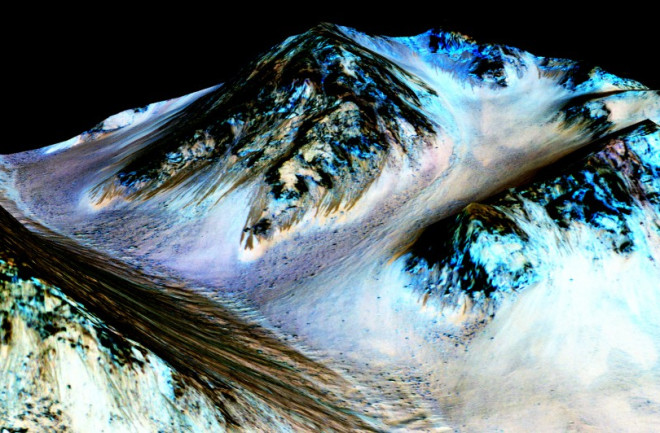 Perchlorates are abundant on Mars, and they allow liquid water to flow. (Credit: NASA/JPL-Caltech/University of Arizona) It’s a major component of solid rocket propellants. It allows water to exist as liquid on Mars, despite atmospheric pressure at the Martian surface being roughly 0.6 percent that on Earth. It also can be broken down to release oxygen that astronauts and future colonists in a Mars settlement could breathe. It’s called perchlorate and it’s abundant on Mars –10,000 times more abundant in Martian dirt than in soils and sands of Earth. That may sound like a good thing, considering the useful properties of perchlorate, but there’s also a flip side. Being a negative ion, perchlorate (ClO4^-) forms various salts, but it has detrimental health effects. Potassium perchlorate is used as a drug to treat certain forms of hyperthyroidism (overactive thyroid). But exposure to environmental perchlorate causes the opposite of hyperthyroidism, namely hypothyroidism — an underactive thyroid. It would be devastating for Martian colonists. An Ubiquitous Chemical Solves Two Mysteries Perchlorate is all over the Martian surface. In 2009, NASA’s Phoenix lander identified perchlorate in the Martian dirt pretty much everywhere it looked. Then, last September, NASA’s Mars Reconnaissance Orbiter demonstrated very high concentrations of perchlorate salts within recurring slope lineae (RSL), features on the planet’s surface that were formed from relatively recent water flows. The finding solved a mystery of how Martian water could be liquid long enough to change the landscape.

Recurring slope lineae are seen as dark streaks as salty water oozes from the walls of Garni Crater on Mars. (Credit: NASA/JPL-Caltech/University of Arizona) Because of the thin atmosphere, pure water on the Red Planet can persist only as ice or vapor, depending on the temperature. But dissolved salts change the physical chemistry, enough that subsurface liquid water can emerge from time to time and stick around as lakes and streams. Following the perchlorate could lead us to underground water, which in turn could lead to native microorganisms, a long-sought milestone in space biology. But it would also factor into the choice for landing sites for human missions and colonies, plus it would facilitate terraformation – changing the planet to be more like Earth. A Source of Energy and Oxygen The oxygen and energy contained in perchlorate make it a potential energy source on Mars, both for generating electricity and for rocket propulsion. Ammonium perchlorate was the main propellant in solid rocket boosters of the space shuttles that NASA flew from 1981-2011. Mars colonization, and even early human landings, will depend on utilization of Mars resources to fuel craft that will ferry people between the surface and orbit, where they will link with larger ships that make the interplanetary voyage. Having four oxygen atoms per molecule also makes perchlorate useful to life-support systems. Colonists could employ certain microorganisms from Earth that break up the molecule to release O2. The extracted O2 could be pumped through life support systems of enclosed underground habitats. Later, the process could be scaled up to enrich air that's pumped into sealed caverns and craters to help achieve paraterraforming — creating Earth-like environments within limited enclosed areas rather than encompassing the entire planet. Not a Solution for Liquid Water Although high concentrations of perchlorate will maintain water in a liquid state, it would be toxic to drink and wouldn’t support microbial life. On Earth, salt-loving microorganisms thrive in the Dead Sea. However, Dead Sea salts are not perchlorate salts, and Mars’ surface water is far more briny than the Dead Sea — even more briny than Antarctica’s Don Juan Pond, where salinity is 44 percent.

The saltiest pond on Earth. (Credit: NASA Earth Observatory image by Jesse Allen) Along with hypothyroid conditions, perchlorate has also been implicated in aplastic anemia and agranulocytosis, conditions characterized by a life-threatening deficiency of blood cells. Perchlorate is particularly dangerous for infants dependent on lactating mothers; that’s enough of a concern on Earth, but especially alarming on a new world that interplanetary colonists might populate. This means that we’ll have to take extreme precaution to remove perchlorate from Mars water and dirt, or from any crops that we grow in it. Dust will have to be kept from contaminating air circulating through life support systems. Future explores and colonists will have to do all of this, not only as they capture the perchlorate in order to reap its benefits, but also as they confront space radiation, physical deconditioning from low gravity, and other potential Martian threats to human health.