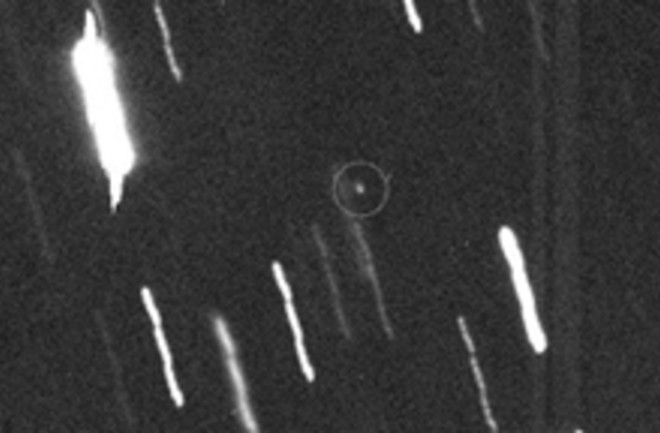 You may remember back in October that NASA scientists downgraded the threat of the asteroid Apophis slamming into the Earth from remote to even more remote. Thanks to refined computation of the object's motion, astronomers changed their estimate of the chances for a 2036 collision from an already unlikely 1 in 45,000 chance to a further long shot of 1 in 250,000. Well, that wasn't enough to ease the head of Russia's space program, Anatoly Perminov, who today said his nation would plan an ambitious space program to spare the Earth from certain doom, and would eventually ask other world powers to join Russia on this quest.

Without mentioning NASA findings, Perminov said that he heard from a scientist that Apophis is getting closer and may hit the planet. "I don't remember exactly, but it seems to me it could hit the Earth by 2032," Perminov said [AP]

. Truly, Perminov didn't remember exactly: Apophis makes a close but harmless pass of our planet in 2029, when it could come within 20,000 miles of Earth, and then swings by again in 2036 (the visit for which NASA downgraded the danger to the remote four-in-a-million). Despite his chronological uncertainly, Perminov was certain something must be done.

"We are talking about people's lives," Perminov was quoted by news agencies as telling the radio station. "Better to spend a few hundred million dollars to create a system for preventing a collision than to wait until it happens and hundreds of thousands of people are killed," he said [AFP]

. Apophis, discovered in 2004, is almost 900 feet long. NASA originally estimated the chance of a 2029 impact at 2.7 percent—that being before its scientists had the opportunity to refine their math through further observations. They also expect the minuscule probability of 2068 Apophis collision, already listed at just 1 in 330,000, to diminish as they continue to learn about the object's trajectory.

Perminov offers no hint as to how Russia plans to deal with Apophis, except to say it would not destroy the asteriod [sic]. "No nuclear explosions (will be carried out), everything (will be done) on the basis of the laws of physics," he says [USA Today]

. Russia is beginning its project in secret, he says, but despite failing to mention NASA's numbers on the actual threat, he expects space experts from the United States, China, and elsewhere to join in on an international operation to save the planet. Related Content: 80beats: Will NASA's Next Step Be an Astronaut Rendezvous with an Asteroid? 80beats: Scientists Pick Up the Pieces (Literally) of an Asteroid Spotted Last October DISCOVER: What To Do Before the Asteroid Strikes Bad Astronomy: Apophis Danger Downgraded Bad Astronomy: We're All Doomed... Oh Wait, No We're NotImage: UH/IA