Right before Christmas, a gargantuan black fissure opened on the Sun. It was shaped like a question mark. 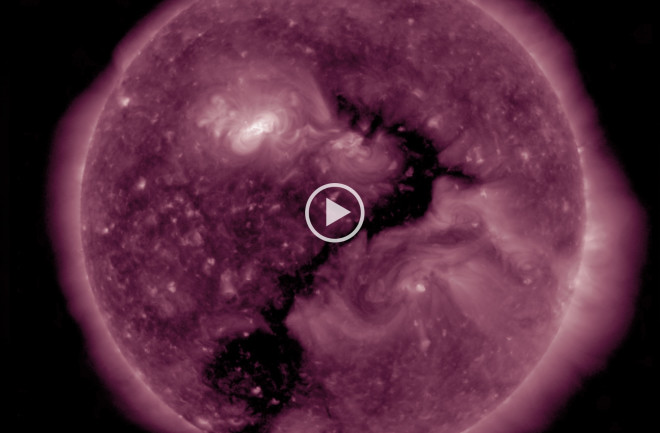 An animation of images acquired by NASA's SDO spacecraft shows a coronal hole developing and dissipating on the Sun between Dec. 18 and 22, 2017. (Movie created on Helioviewer.org) It doesn't really take much imagination to see the dark question mark forming and dissipating across most of the Sun's surface in the animation above. The images that make up the animation were acquired by NASA's Solar Dynamics Observatory spacecraft between Dec. 18 and 22, 2017. And if you're thinking that the question mark is some sort of optical illusion, guess again. The feature is very real: an unimaginably large fissure in the Sun's atmosphere. There's nothing to be alarmed about. Features like this are completely normal. Scientists call them "coronal holes." I've written about coronal holes before, most recently almost exactly a year ago. Here's my explanation of the phenomenon from that story,

"A new 'hole' in the Sun’s atmosphere has sparked stunning displays of the northern lights here on Earth":

Coronal holes are areas where the Sun’s magnetic field opens toward space. This greatly enhances the solar wind, which consists of high energy particles that constantly stream away from the corona. The enhanced wind of hot particles blowing into space can move at speeds approaching 2 million miles per hour. That’s about twice the average velocity of the solar wind. With so much hot material blowing outward, a darkened area — a so-called “hole” — is left behind on the Sun.

These features stand out best when viewed in extreme ultraviolet light, as is seen in the animation of false-color SDO images above. The Sun appears yellow to our eyes because that's the brightest wavelength of light that is visible to us. But the Sun emits light in many other wavelengths as well. SDO's Atmospheric Imaging Assembly, or AIA instrument, images 10 different wavelengths of light coming from the Sun. Each one reveals different aspects of the sun's atmosphere. For a detailed explanation, check out this post from NASA. Here's one thing SDO cannot help us with: What the Sun might be asking. Perhaps what the New Year will bring?...