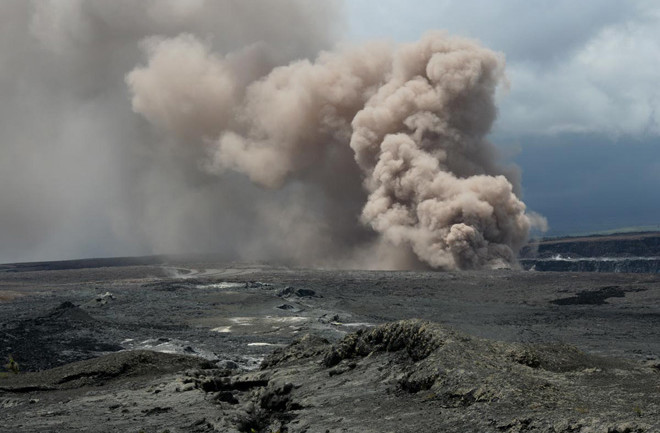 Small (but still hazardous) explosive eruptions from Kilauea in 2008 might require a tweaking of the Volcanic Explosivity Index (VEI). Image: HVO/USGS. Much of the discussion of volcanic eruptions tends to center on the big ones -- those monstrous eruptions that really capture everyone's attention, potentially plunging parts of the planet into a cool spell that could last years. Those eruptions are relatively rare, coming a few times a decade for the smaller ones and a few times a century (or longer) for the real colossal blasts. It is true that those are important events to understand, especially because humanity will need to face life after a giant eruption like Tambora or Taupo someday in the future. However, all this focus on the enormous eruptions ends up leaving those "everyday" events in the cold. Even if they are small, they can have a profound effect on local areas, especially if they are places that are highly frequented by tourists. Some background on the scale of volcanic eruptions: The Volcanic Explosivity Index (VEI; see below) was devised as a way compare eruptions (mainly explosive eruptions) much in the same way we compare earthquake magnitude using the Richter Scale. It was developed mainly to discuss eruptions that have an impact on global climate (that is, the big eruptions). The VEI is based on the volume of volcanic tephra (debris of explosive eruptions, like ash and bombs) that the eruption produces, so VEI 0-1 eruptions produce small amounts of tephra, only ~10,000 m^3 (picture a cube with ~21.5 meter / 70 foot sides) while the VEI 7-8 eruptions produce a remarkable 1,000,000,000,000 m^3 (take that cube and make it 10 km / 6.2 miles on each side). A VEI 7-8 eruption is actually 10 million times more productive than a VEI 0-1, however across the Holocene (the last 10,000 years), there have been only 6 eruptions that make it into into the heady VEI 7-8 territory while there have been at least 2215 VEI 0-1 eruptions that we know of. I emphasize this idea because a VEI 0-1 eruptions leaves little to be preserved in the geologic record -- maybe a mere dusting of ash or a small lava flow -- so this value is minimum value for these eruptions*.

The Volcanic Explosivity Index with volumes and terminology as currently defined. Image: Table 8 from Siebert et al. (2010), Volcanoes of the World, 3rd Edition. That being said, if you're standing near the vent of a 0-1 explosion, well, you can still get hurt or killed. Volcanic debris is heavy and it is thrown out of the vent at high speeds, so even a small explosion can be hazardous in places where people frequent. You might notice on the VEI that these very small explosive eruptions, those under 10,000 m^3 fall into the VEI 0 category, which is described as "gentle". That is because this is where the VEI breaks down and treats all eruptions that produce small volumes of tephra (remember, explosive debris) as effusive eruptions -- that is, eruptions that produce lava flows. However, this is not the case in many places. The eruption of Mayon in May 2013 was a tiny phreatic (steam-driven) explosion that was likely VEI 0 but it killed 5 climbers who were near the vent when it occurred. That would hardly be considered as "gentle". Similarly, in 2008, Hawaii's Kilauea produced a series of small explosive eruptions from the Halema'uma'u summit vent and this is detailed in a recent paper by Bruce Houghton and others in Geology. These explosions only produced 10-310 m^3 of tephra, but due to the close proximity of the vent to tourist attractions and roads, they could have inflicted significant damage and injury if, let's say, a tour bus was caught in their path. Thankfully this didn't occur in 2008. These explosions were very small strombolian- or Hawaiian-style eruptions that would likely never have been noticed in the geologic record except for the fact that the Hawaii Volcano Observatory is right there, next to Halema'uma'u, to see it all happen. Clearly, these eruptions, although technically VEI 0, were not effusive or gentle. How can we handle such events?

A revised version of the VEI to account for very small but still explosive eruptions, as suggested by Houghton and others (2013). Image: Figure 5 from Houghton and others (2013). Houghton and others (2013) suggest we might need to tweak that VEI scale to account for smaller explosive eruptions. However, we don't want to disrupt the definitions for VEI 1-8, so they suggest we project downward, so the 2008 eruptions at Kilauea would be VEI -2 to -4 (see right): clearly explosive, but small. The use of "gentle" and "effusive" would be jettisoned from the VEI -- after all, it is an explosivity index -- and instead those small strombolian and Hawaiian eruptions that would be lumped into VEI 0 could be discussed with more clarity, which is important for developing volcanic hazard assessments for highly trafficked volcanic vistas like Kilauea or Tongariro. The next challenge would be figuring out how to compare the effusive (lava flow) eruptions with the explosive eruptions, which is more of an apples and oranges issue. However, by adding negative VEI values, we can give those small explosions a little more of their due. * Sidenote: If you do a rough estimate of the total volume over the last 10,000 years of all the VEI 0-1 eruptions (assuming 10,000 m^3 per eruption, which is likely a very loose estimate), the total volume still only adds up to roughly a VEI 2-3 eruption (something like Redoubt's 2009 eruption). References: