by David Lowry From the battleground state of North Carolina, I am receiving text messages and phone calls urging me to vote about every half hour. Something special is brewing here, you can taste it in the damp air as the peak fall color of red and yellow leaves negates the need for sunshine. From the day Obama blew out Hillary in the NC primary and lifted a PBR to the sky in downtown Raleigh, I knew something special was about to occur. 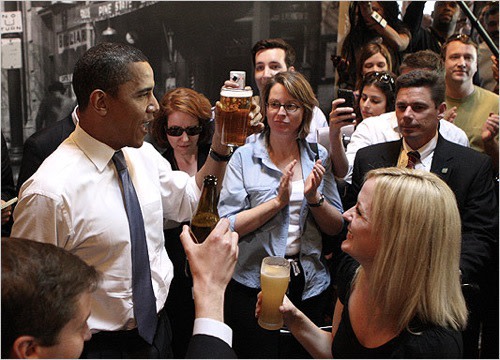 North Carolina is the state where the civil war ended (in Durham, look it up) resulting in the birth of the cigarette onto the world stage. It is the state, where not too long ago Jesse Helms reined supreme. But this summer, Sheril and I stood in line with 40,000 other people in front of the Woolworth's store in Greensborro. The same Woolworth's store, where 48 years ago four African American students sat down and demanded they be served. 48 years later, folks of all backgrounds were joined together here in North Carolina to support Obama. North Carolina is going blue. Yes, I believe it is today. Long the Republican stalwart, the new south is about to rise. Just moments ago I walked across the Duke campus from the library and saw a young man wearing a "Veterans for Obama" shirt. The man was missing his right arm. In its place were two hooks. The story obvious. This state loves the military more than any other, but enough is enough. North Carolina is going blue. Mark my words.