Whitson looks back at her awesome career and shares what it's like in space. 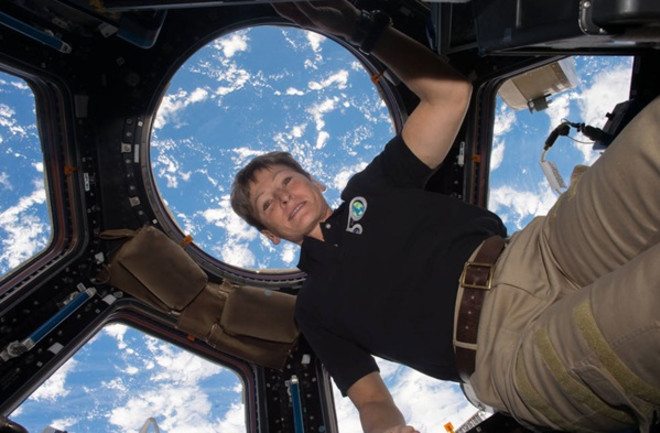 Whitson during her time on the International Space Station. (Credit: NASA)

Peggy Whitson’s career as an astronaut has been trailblazing: With a total of 665 days in space, Whitson not only currently holds the space endurance record in the U.S., she is eighth on that list overall. She was the first woman astronaut to hold NASA’s chief astronaut position, has completed a total of 10 spacewalks over the course of her career, and commanded the International Space Station twice.

On May 16, Whitson received the 2019 Women in Space Science award from the Adler Planetarium’s Women’s Board in recognition of her accomplishments in the United States’ space program and as a woman in the field of science and technology. The annual award ceremony hosted by the Women’s Board also doubles as a fundraiser supporting the planetarium’s many and varied science, technology, engineering and math (STEM) efforts for Chicago youth (in particular, young women), who, as Whitson stresses, are living during an exciting time when the industry is rife with opportunities to build the future of space flight from the ground up.

“I first dreamed of becoming an astronaut when I saw Neil Armstrong take the first step on the Moon. I was nine years old at the time,” Whitson told Astronomy. “In retrospect, the young people that I talk to — that 8 to 10 [age range] — to me, is the perfect age group when they’re most influenced,” to find something they love and want to chase after. “For me, that was the case,” she says.

But like many other girls at that time, becoming an astronaut seemed more of a dream than a reality to chase — NASA astronauts were exclusively male until 1978. “When I was 18, I graduated from high school. It was the first year they picked female astronauts. And for me, that’s when it changed from being a dream to be an astronaut to being a goal,” Whitson says.

Among those female astronauts, she says, was a biochemist — a field Whitson was already hoping to pursue. “That seemed to indicate that I could do what I really wanted to do and maybe become an astronaut as well. Luckily, I had no idea how hard it would be and just tried to pursue it,” she says.

Pursuing her dream did involve choices. When choosing between two postdoctoral research positions, Whitson turned down an opportunity at the prestigious Salk Institute for a position instead at NASA’s Johnson Space Center. “It was the right path for me and that’s what was important,” she says. “I called the guy to tell him at the Salk after he’d offered me a fellowship there that I was turning it down to go to take a fellowship at the Johnson Space Center, and he told me I was making the biggest mistake of my life. Wish I’d remembered his name — I could have called him from the space station and said, ‘Not so much!’”

Even so, that path included 10 years of sending application after application to the astronaut program before she was finally accepted, Whitson says.

Whitson’s experiences with long-term spaceflight uniquely qualify her to speculate on the challenges that await future astronauts. As NASA looks ahead to longer-duration missions, especially to the Moon and Mars, questions loom about the physical and mental effects of living and working in space.

“The lack of gravity can be challenging, trying to get a job done sometimes,” she says. “You don’t realize how much you rely on gravity. You’ve become used to gravity — you know, how you do everything is based on gravity. So adapting to that environment is actually one of the special parts about being in space, but it is a challenge in terms of trying to get work done sometimes,” Whitson says.

But for Whitson, coming home was harder than leaving it. “For some people, they get a little sick when they go into space, and other people get a little sick when they come back home. I get sick when I come back home. So in my mind, gravity sucks,” she says. “It’s definitely an adaptation when you get back.” To combat the effects of microgravity on the human body, she says, astronauts work out for two hours each day. But while that keeps the large muscles of the body strong, the smaller muscles around the knees and ankles, which are used for balance and become unnecessary in space, still suffer. “We have to do a reconditioning program when we get back that’s focused on trying to get all those muscles that haven’t had to work to remember how to work,” she says, explaining that the process takes about 45 days.

That’s certainly something to consider if astronauts must spend months on a voyage to Mars in low gravity, only to risk falling if they are unable to balance while taking their first steps on the Red Planet.

But the thing Whitson missed most? “Variety of food,” she says. “Our food lab does a great job trying to come up with things that are preserved.” But, for example, “too high salt concentration is bad for your bones. And so we don’t want to exacerbate a problem that we already have, so the diet is very constrained and limited in variety,” Whitson says. “Trying to come up new ideas with the same old stuff gets kind of challenging at times.”

That challenge, she predicts, will persist and even grow on longer missions. “For longer-duration missions … we’re going to have to have foods that are shelf stable for even longer periods of time, which is probably going to decrease their palatability. It also will potentially decrease their nutritional value, so there’s a lot of research going on for how to improve that,” she says.

But the thing she thinks will be the biggest challenge for astronauts crossing greater distances isn’t the menu, but the means of communication. “When I was on board the International Space Station, I could call home almost anytime I wanted. So, I didn’t feel disconnected and isolated. And I think that is going to be very different when you’re on a Mars mission, say, when it takes 20 minutes for your question to get to Earth and another 20 minutes for an answer to come back. It’s going to be a different style and I definitely think people will feel more isolated in a scenario like that,” Whitson says.

Another consideration, as NASA looks to the future of human space exploration, is the space suit astronauts currently use. NASA famously canceled what was to be the first all-female spacewalk earlier this year due to the lack of properly sized suits. Whitson, who has spent time in both the current U.S. and Russian space suits, gives insight into why the issue occurred: “The U.S. space suit is easier to work in because it’s lower pressure than the Russian space suit. The Russian space suit is easier to work on, in that it was designed to be modified and updated on orbit, versus the U.S. space suit. We always assumed we’d have a shuttle taking the suit up and down so we never really worried about that, so it’s a little more complex when you have to start working on them and fixing them, repairing them in space,” she says.

She also explains that the U.S. suits have hard upper torsos available only in three sizes: medium, large, and extra-large. “For me, a medium is bigger than it needs to be, and you have to learn to adapt and work in a suit that doesn’t fit well — which is physically challenging, requires a lot more grit, mental perseverance, to try and overcome those challenges,” she says.  “So it definitely could be improved upon. There are parts of those two different space suits [Russian and American] that I think need to be taken to the next level and improved — including more sizes of the torso sizes so that it will make it a little bit easier for females to do spacewalks.”

The last point is certainly still a challenge to be met: As of this writing, only 14 women have walked in space, despite the hundreds of spacewalks performed — and hundreds of spacewalkers since 1965. As women continue to play a role in the space program and the percentage of women chosen as astronaut candidates rises, developing the resources they need to succeed becomes vital to the success of the missions they participate in.

Although she has retired from active astronaut duty, Whitson is excited about the fast-paced future of human spaceflight. “I think there’s tons of things out there right now that are so exciting in space,” she says. “It’s going to be, I just think, really an exciting time to be in the space industry because there’s going to be so many opportunities for young people to get out there and actually get their hands really dirty on developing things and being involved in the process nearly from the bottom up.”

Still, she acknowledges that getting into space is no easy feat — nor, she says, will it ever be. “Obviously I think it’s a risky business and people have to acknowledge and understand that getting people into space is not a trivial thing and it’s not really ever going to be,” she says. “But it’s an exciting time. And we can’t let the risk keep us from doing our exploration.”

That exploration, she hopes, will continue to be a part of the United States’ goals, whether through NASA or commercial endeavors. “For those people who don’t think it’s of value … if you look at history, those countries that are exploring and pushing the technological limits — those countries are the strongest. I think we should be that kind of a country, continue to be that kind of a country, otherwise we need to plan on taking a backseat to the rest of the world and I don’t like that picture,” she says. “We need to lead in technology and exploration. Period.”