After being exhumed from the depths of a lake, this 1200-year-old dugout canoe has a long way to go before it's properly preserved. 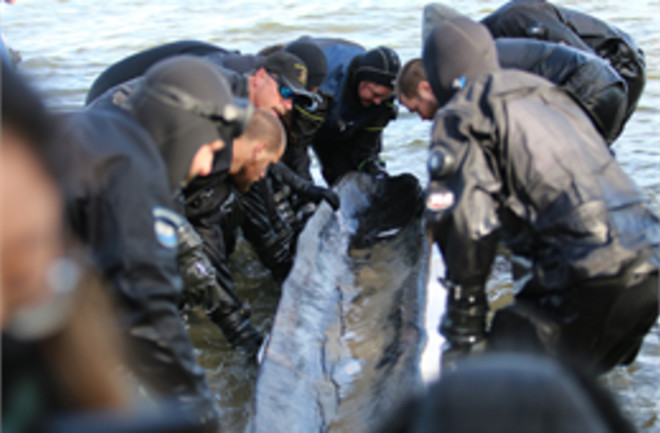 In June 2021, Tamara Thomsen, an underwater archaeologist with the Wisconsin Historical Society, was riding an underwater scooter in Madison, Wisconsin’s Lake Mendota when she spotted what she thought was a log. Upon further investigation, she found it to be a dugout canoe. She took several photos of the vessel and brought them into work to be examined.

At first, the canoe appeared to have been crafted by a Boy Scout troop from the 1950s. However, Jim Skibo, a Wisconsin state archaeologist, noticed notched stones in the boat that resembled sinkers used by native fishermen's nets. Because of this, a sliver of the vessel was removed for carbon dating. To their surprise, the canoe was around 1,200 years old and most likely used by ancestors of the Ho-Chunk tribe or the Effigy Moundbuilders.

It took months of planning to get the canoe removed safely from the bottom of the lake, but time was ticking. The sediment that had helped keep the canoe preserved was gone and now that the canoe was exposed, it was at risk of deteriorating.

The Wisconsin Historical Society teamed up with the state's Native American tribes to execute a plan that safely removed the canoe from the lake. In early November, an archeological team spent three days excavating the canoe and then safely bringing it 27 feet to the surface using inflatable bags.

As the canoe was carefully brought onshore, people began to cheer. It was an emotional moment. While 37 dugout canoes have been found in Wisconsin, this one is the oldest and the most in-tact.

Now that the dugout canoe has been safely removed from Lake Mendota, the preservation efforts have begun. The efforts will take close to three years to complete. The canoe will be submerged in a tank full of tap water and a bio deterrent to help prevent bacteria from growing on the vessel.

Once the canoe is perfectly preserved, it will be ready for display, just in time for the grand opening of the new Wisconsin History Museum in 2026.