Preparing for a Rocky Touchdown on Ryugu 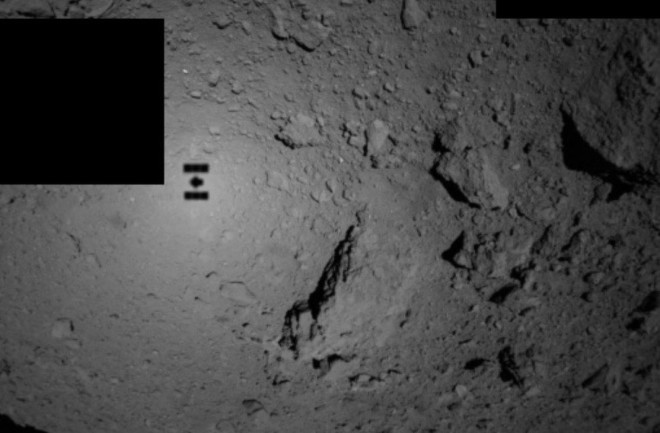 After the two successful touchdown rehearsals and data collected with landers and rovers, scientists know just how difficult it will be to touchdown successfully on Ryugu's surface. (Image Credit: JAXA)

Hayabusa2’s close encounter with the asteroid Ryugu continues to amaze and surprise. Its two successful touchdown rehearsals have given scientists remarkable up-close looks at the asteroid’s surface, giving the spacecraft its best shot at a successful touchdown in 2019. At a press conference at the Division for Planetary Sciences of the American Astronomical Society 50th annual meeting on October 25, scientists gathered to discuss the most recent updates in the mission and what they learned from the touchdown rehearsals.

“The first close-up look at the asteroid kind of shocked us,” Masaki Fujimoto, of the Institute of Space & Astronautical Science and the Japan Aerospace Exploration Agency (JAXA), said at the conference. With the imaging instruments aboard the spacecraft and images from the craft’s landers, scientists were surprised to see that Ryugu’s surface is covered with rocks and boulders, the scientists at the conference said.

They also found that there’s no powder on Ryugu, no fine grains of material whatsoever, according to Deborah Domingue of the Planetary Science Institute. The team was able to identify the grain size on the surface with images along with high-res temperature data. They then compared and contrasted data with data we have of Earth’s own moon, and they found no areas with what’s described as “lunar-like regolith” or material with fine grains like the powder on the moon’s surface.

The data collected from landers deployed to the asteroid’s surface and from observations has brought to light just how challenging a touchdown on Ryugu will be. Because, as Fujimoto described, “the surface is not friendly to the mission.”

The data collected helped the mission team to narrow down and choose a landing site for the craft that will not damage the craft, and allow it to function properly and take samples of the surface that represent the entire composition of the asteroid.

“The big story here is the boulders, the very rocky surface, and the challenges to sample such a surface,” Domingue said.

So far, the team has chosen a landing spot with a diameter of about 66 feet (20 m), Fujimoto said. They narrowed down landing sites by counting boulders with diameters larger than about 10 feet (3m), taking temperature data, studying the size of the grains and rocks within the site, and using images and data from the spacecraft, landers, and rovers.

The mission team will continue to plan for a touchdown. “I think we’ll make a successful touchdown January the earliest,” Fujimoto said.