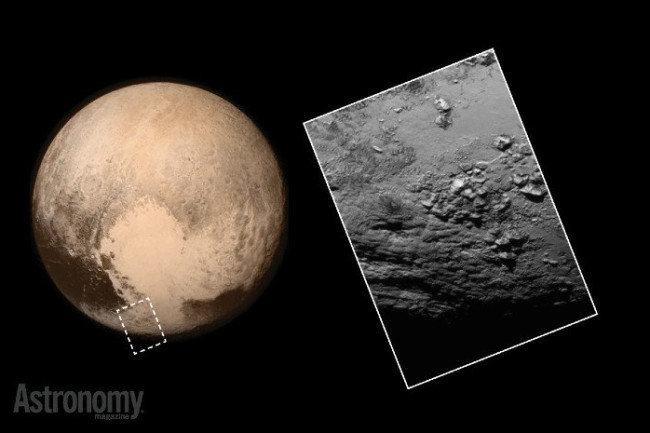 NASA has released the latest batch of images of Pluto and its complex system of moons, revealing the dwarf planet’s heart in stunning detail. The white heart shape was Pluto’s most prominent feature as the New Horizons spacecraft was still millions of miles away, and for that reason astronomers have named it after the planet’s discoverer, Clyde Tombaugh. What’s more, the region has incredible and complex geology. “There are mountains in the Kuiper Belt,” New Horizons Principal Investigator Alan Stern said at a 3 p.m. EDT press conference today. Astronomers expect these mountains are as much as 11,000 feet (3,300 meters) high. And those towering features are very likely made of water ice — a substance known to occupy Pluto’s interior but yet to be conclusively detected on the surface. And yet water is the only way to get these mountains, the team thinks. Stern said he submitted a paper to The Astrophysical Journal in May predicting such features, which was accepted earlier in the day. The journal’s editor only learned about the ice mountains from the press conference. Because nitrogen sits on the surface, some sort of ice volcanism must be present, even though it has yet to be detected. New Horizons’ images will be picked apart meticulously looking for signs of such activity. The first high-resolution image from the flyby released today shows an area just off the southern edge of the informally named Tombaugh Regio. “The most striking thing geologically is we have not yet found a single impact feature on this image,” says New Horizons science team member John Spencer. “Just eyeballing it we think it has to be less than 100 million years old, which is a small fraction of the age of the solar system — it could be active right now.” And the high-resolution image is only one of many that are still to come. 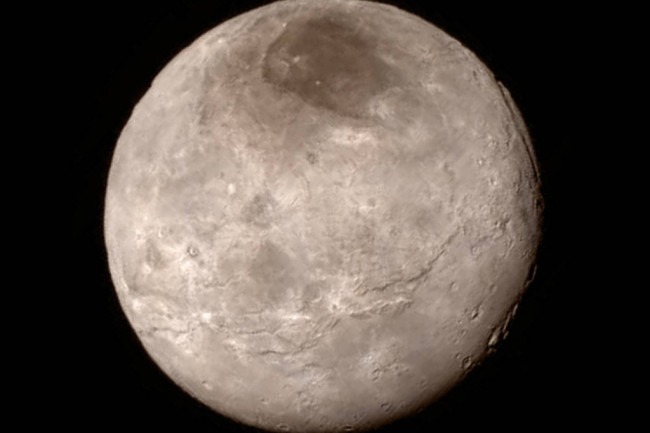 Charon’s dark spot, which mission scientists have now dubbed “Mordor,” remains intriguing in the latest image of Pluto’s largest moon. Charon might have been upstaged by Pluto, but another incredible find announced today was that the dwarf planet’s moon is also active. Recent images had seemed to indicate Charon was ancient and cratered. Lowell Observatory’s Will Grundy, head of the New Horizons surface composition team, said that some images of Charon make the feature look like an impact basin, which might at first be surprising to find perfectly at the pole. But if the impact was large enough, the moon might have rotated to put it at the pole. “I thought Charon might be an ancient terrain covered in craters,” said New Horizons scientist Cathy Olkin. “Charon blew our socks off when we had the new image today." “We think the dark coloring could be a thin veneer,” she said. The moon also has a massive canyon on it that resembles features seen on Uranus’ moons, as well as Saturn’s moon Tethys. Astronomers are still trying to unravel the puzzle of how it formed, but one theory they’re toying with is a massive impact that temporarily melted Charon’s interior. When the moon melted and refroze, the expansion and contraction could have caused cracking. Finally, NASA now has early images of Pluto’s four small moons, which still look like pixelated footballs. Mission scientist Hal Weaver noted that Hydra looks surprisingly larger than expected. "That can only mean that Hydra's surface is primarily composed of water ice," he said.

Explaining the Other Red Planet

Pluto looked undeniably like Mars in New Horizons’ images before the ones released today, but the high-resolution images show that the similarities between Earth’s neighbor and the “other Red Planet” end there. Pluto’s surface is entirely composed of ice. Laboratory simulations paired with telescope observations suggest that the surface is roughly 90 percent nitrogen with about 10 percent methane mixed in. That means that everything you see on Pluto — all the craters, canyons, ice caps, (possible) wind-swept dunes, mountains, tectonics, and anything else — is all happening in a complex veneer of ices overtop a core of water ice. “Your brain wants to make bright stuff ice and dark stuff dirt, but I don’t know if that’s right,” Grundy said. Instead, the color variations are all likely ices of various ages and compositions. Grundy thinks that — quite appropriately — the dwarf planet’s icy mantle might be exposed in the heart shape. But it’s still unclear how those core ingredients are mixing and reacting to form Pluto’s complex geology. “Pluto has so much diversity. We’re seeing so many different features,” said New Horizons Mission Operations Manager Alice Bowman. “There’s nothing like it.” Grundy says his team has been searching for ices that might serve as some sort of bedrock — a more permanent ice. But this morning mission scientists were still saying they hadn’t been able to identify any nonvolatile ices, that is, those that wouldn’t sublimate or turn to gas under the Sun’s radiation. Another potential force shaping the surface could upend humanity’s views of the outer solar system entirely. “There’s a lot of heat in an internal ocean,” Grundy added, speculating that it too could create the tectonic forces. 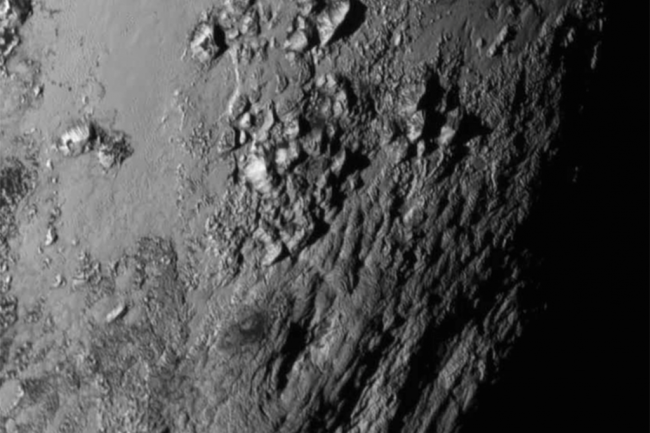 New close-up images of a region near Pluto’s equator reveal a giant surprise: a range of youthful mountains.

Why the Red Face

So what makes the surface red? Most likely it is complex organic molecules — potentially something like what Carl Sagan dubbed “tholins.” "When you see something red in the outer solar system, generally that’s an indication the object is covered in complex organic molecules,” said Northern Arizona University astronomer Stephen Tegler. He runs the Astrophysical Ice Laboratory at Northern Arizona University where he works with Grundy and other astronomers to simulate Pluto’s surface so New Horizons knows what it’s looking at. Sunlight travels out through space, hits the surface of Pluto, and the blue rays are absorbed, leaving the red light for our eyes to see. “One of the things that can absorb really efficiently in blue are complex organic molecules,” he said. “An easy way to generate them would be to take something like methane and hit it with particles or UV light; you can break it up and form more complex molecules.” “The red stuff chemically is very, very interesting, whatever that is,” he added. What’s more, astronomers have used Earth-based telescopes to classify the colors of Kuiper Belt objects (KBOs) like Pluto. Some of the reddest objects of all are “centaurs” — icy planetesimals that orbit between Jupiter and Neptune. Tegler is also a leading expert on the color of KBOs and centaurs. Pluto has long been known to have a red tint, but the astronomer says it’s not that red in comparison to other KBOs. “Pluto is not an object we would call red in our surveys of Kuiper Belt objects,” he said. “And there are centaurs that we would consider much redder than Pluto.” “If Pluto is considered really red when we go see it, what’s that going to mean for when we go see some of these other objects?” he added.