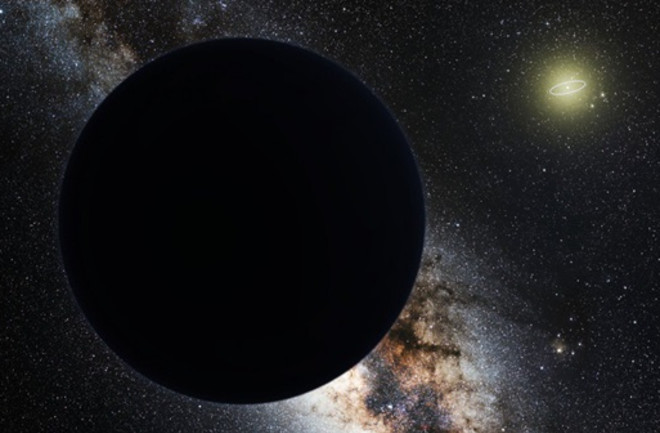 Tiny black holes are thought to speckle the universe, and new research posits the solar system may have captured one. (Credit: nagualdesign/Tom Ruen/Wikimedia Commons)

Something strange may be lurking in the outer solar system. The odd orbits of distant space rocks suggest there’s a giant, elusive world dubbed Planet Nine waiting out there to be discovered. But now, in a new research paper, a team of scientists suggest something far stranger may be influencing the orbits of these distant worlds. These astronomers say our solar system may be home to one of the earliest black holes in the universe: a primordial black hole.

Over the past few years, astronomers have uncovered about a dozen objects in the distant solar system that defy expectations. In addition to a few other odd attributes, this special subset of icy objects orbiting past Neptune, dubbed Trans-Neptunian Objects, or TNOs, all make their closest approaches to the Sun at about the same spot in space.

But some astronomers say that doesn’t fit with current theories about the solar system. Even at their closest, these so-called extreme TNOs (eTNOs) stay so far from our last known planet that Neptune can’t be responsible for shaping their odd orbits.

So, to account for the bizarre orbits, a team of astronomers recently invoked a wild yet increasingly convincing explanation for how they came to be. Namely, a goliath planet some five to 15 times the mass of the Earth is hiding far beyond Pluto, hundreds of times farther from the Sun than Earth. It’s this giant world, Planet Nine proponents argue, that is shepherding the eTNOs into their unusual orbits.

In recent years, astronomers have discovered a number of far-flung objects that all have very similar perihelia, meaning they make their closest approaches to the Sun at about the same location in space. One leading theory that attempts to explain the clustering is that a massive and unseen world known as Planet Nine is hiding in the outer solar system. (Credit: Fauxtoez/Wikimedia Commons)

But according to new research posted September 24 on the preprint site arXiv, Planet Nine isn’t the only possible explanation for the eTNOs. The culprit, the new study claims, could be a primordial black hole instead. Primordial black holes are predicted to have popped into existence within the first few fractions of a second after the Big Bang. However, their existence has never been confirmed.

If true, the proposed black hole likewise would be located hundreds of times farther from the Sun than Earth. But because black holes are incredibly adept at crushing down matter, a black hole equivalent to roughly five Earth-masses would be only about the size of a baseball.

The researchers say a strange set of gravitational anomalies, recently identified by the Optical Gravitational Lensing Experiment (OGLE), may help explain why Planet Nine is actually a black hole.

Based on five years of OGLE observations, researchers uncovered six strange microlensing events that seem to have occurred when objects roughly 0.5 to 20 times the mass of Earth acted as gravitational lenses. According to the paper, these objects, located about 26,000 light-years away toward the Milky Way’s galactic bulge, could just as easily correspond to an unexpected population of primordial black holes rather than free-floating planets.

“Capture of a free-floating planet is a leading explanation for the origin of Planet [Nine],” wrote the authors of the new study, “and we show that the probability of capturing a [primordial black hole] instead is comparable.”

If such a black hole, rather than a rogue planet, were captured by the Sun and is now roaming the outer solar system, then it would influence the orbits of eTNOs in exactly the same way as Planet Nine.

According to Konstantin Batygin, who has been instrumental to the Planet Nine hypothesis but was not involved in the new study, it’s definitely possible that a primordial black hole could replace Planet Nine in their model, but that doesn’t mean it should.

“The important thing to understand here is that all that the calculations can tell is the mass of Planet Nine, not its composition,” Batygin told Astronomy. “So, in principle, Planet Nine can be a planet, a potato, a black hole, a hamburger, etc., as long as its orbital parameters are right.”

Though Batygin isn’t entirely convinced a black hole roaming the outer solar system would be a more natural fit than Planet Nine, he admits he’s hesitant to write off the new theory completely.