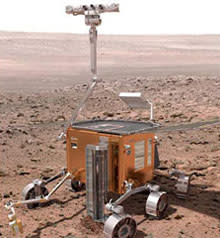 Exploring Mars looks like so much fun, everyone want to get in on the act. Following the path blazed by the NASA rovers Spirit and Opportunity and the NASA lander Phoenix, which are all currently active on the Red Planet, the European Space Agency (ESA) has designed a rover that is expected to take off for Mars in 2013 and land on the surface in 2015. The ESA's ExoMars mission is designed to examine the planet's geology and to search for signs of past life. ESA officials boast that the two prototypes, nicknamed Brandon and Bruno, are more maneuverable and more independent than previous robots that have made the journey to Mars, and say that these advantages will allow their rover to see more of the planet. Says engineer Chris Draper:

"Obviously, the American MER rovers (Spirit and Opportunity) that were put up by Nasa enjoyed an extreme amount of success. They were able to travel large distances, well beyond their planned lifetimes. But we're hoping that with our baby, we'll be able to go places that are actually much further" [BBC News].

One major advantage that the ExoMars rover will have over Nasa's rovers is that it will be able to operate autonomously, making its own decisions about picking the best routes across the boulder-strewn, undulating landscape. Spirit and Opportunity need to be told by human operators which moves to make next [The Guardian].

As it takes about half an hour to relay a signal between the Earth and Mars, the NASA rovers have squandered many hours waiting for commands. The ExoMars rover will also be able to navigate difficult terrain that Spirit and Opportunity might balk at. Each prototype has six-wheel steering, which means that they can turn all six wheels and crab sideways. They also have what engineers describe as "wheel walking capability". This means that when the vehicles come across a particularly steep or slippery slope, they can anchor themselves with five of the wheels and inch each wheel forward one at a time, to crawl over an obstacle

DISCOVER recently had an alternate take on how to build a robot that can deal with Martian landscapes: "The Robot Designed to Master Mars." Image: ESA