Philae Lander Is In a Precarious Position on Comet 67P 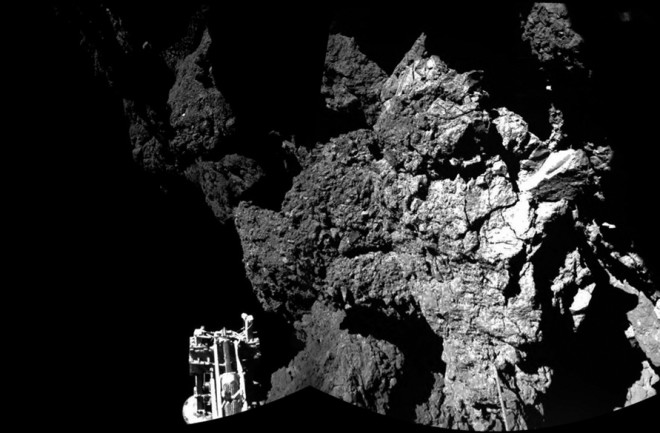 Rosetta’s lander Philae is safely on the surface of Comet 67P/Churyumov-Gerasimenko, as these first two CIVA images confirm. One of the lander’s three feet can be seen in the foreground (Courtesy: ESA/Rosetta/Philae/CIVA) If we learned one thing yesterday, it’s that there’s no shortage of drama in space exploration. After separating from the Rosetta spacecraft, the Philae lander descended toward the surface of Comet 67P/Churuymov-Gerasimenko to make history, but when it reached its destination Philae didn’t quite stick the landing like expected. After analyzing a fresh round of data, mission scientists today said the lander officially touched down three times. After making initial contact, Philae bounced off the surface of the comet and went vertical — floating roughly 0.6 miles above 67P. Philae hovered in space for about two hours before falling to the surface again, bouncing a second time (about 7 minutes of air time), and finally touching down for a third and final time.

This image was taken by Philae's down-looking descent ROLIS imager when it was about 40 m above the surface of Comet 67P/Churyumov-Gerasimenko (Courtesy: ESA/Rosetta/Philae/ROLIS/DLR) It was all systems go after settling on the comet, and scientists enjoyed several hours of a crystal clear connection to the beloved lander, which beamed back the first images of 67P. But no good drama is without a tantalizing cliffhanger.

Where Art Thou, Philae?

John-Pierre Bibrin, principal investigator for Philae’s set of seven micro-cameras, said they aren’t certain where Philae is, but they have a general idea. The massive first bounce caused the lander to overshoot its intended landing target and eventually come to rest in a perhaps precarious position. Based on the darkness of the raw photos, Stephan Ulamec, Philae lander manager at the DLR German Aerospace Center, said Philae is likely in the shadow of a cliff on the comet. What's more, the lander could also be on the rim of a crater. Two of Philae’s landing feet are firmly on the ground, but its third foot isn't touching ground. And Philae isn’t anchored to the comet because its harpoons didn't fire as planned yesterday. So it’s relying on a paper-thin gravity field to ride atop 67P.

Stephan Ulamec, Philae lander manager at the DLR German Aerospace Center points to the general area they think Philae landed after bouncing twice of the comet's surface. The planned landing area is the small red square (Screenshot from ESA media briefing). The team will initiate the next sequence of experiments with the utmost caution. For example, they are a bit hesitant to activate Philae’s drill for samples, since they don’t know how it would move the craft. “Since we do not really know how we landed, since we are not anchored, we need to be very careful about activating mechanisms,” Ulamec said.

For the next two days, scientists will come in and out of contact with Philae as the Rosetta orbiter dips below the comet’s horizon. But data-gathering instruments are whirring away, and photographs are being snapped in the meantime. How long Philae will do its work is another question. The lander is running on batteries that are expected to last about 2.5 days. After that, the lander is designed to switch to an alternate set of batteries that are charged via Philae’s solar panels. But since Philae is resting in a cliff’s shadow, charging the batteries could be a problem. As the days and weeks pass, we’ll continue to learn more about this 4.6-billion-year-old comet as Philae does its thing. But for now, enjoy the view.

Rosetta’s lander Philae has returned the first panoramic image from the surface of a comet, shown at left. The view, unprocessed, as it has been captured by the CIVA-P imaging system, shows a 360° view around the point of final touchdown. The three feet of Philae’s landing gear can be seen in some of the frames. At right, superimposed on top of the image is a sketch of the Philae lander in the configuration the lander team currently believe it is in.