Other stars produce superflares and it can be bad news for exoplanets. Turns out our sun could produce them, too. 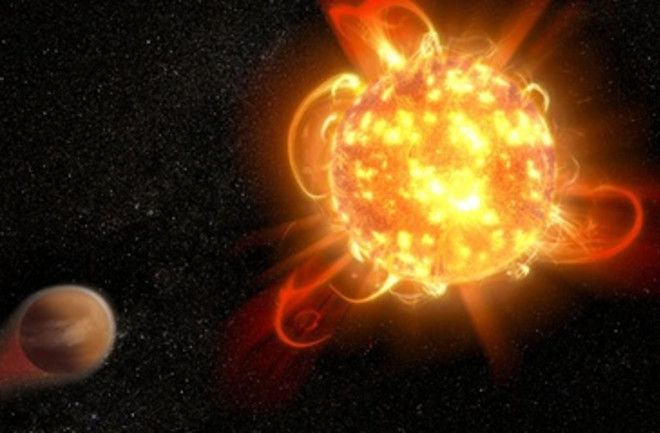 A power superflare fries an exoplanet in the star’s system. (Credit: NASA, ESA and D. Player)

Astronomers have learned over the past decade that even large solar flares — powerful bursts of radiation — from our Sun are actually small potatoes compared to some of the flares we see around other stars. It’s now common to spot “superflares” hundreds to thousands of times more powerful than the Sun’s flares from stars hundreds of light-years away. Earlier this year, researchers even identified a star that emitted a turbocharged flare some 10 billion times more energetic than those typically seen bursting from the Sun.

These superflares are mainly observed in young, active stars. But new research presented Monday at the 234th Meeting of the American Astronomical Society in St. Louis shows that even our middle-aged, relatively docile Sun is capable of producing some astoundingly powerful flares — albeit only once every one to two millennia. The work was also published May 3 in The Astrophysical Journal.

“Young stars have superflares once every week or so,” said the study’s lead author, Yuta Notsu of the University of Colorado Boulder, in a press release. “For the Sun, it’s once every few thousand years on average.”

Roughly speaking, about 30 to 50 percent of superflares produced by the Sun can strike the Earth, Notsu said. This means that we can expect a superflare about 100 times bigger than normal to strike Earth about once every 10,000 years or so.

And we could be overdue. “Our study shows that superflares are rare events,” Notsu said. “But there is some possibility that we could experience such an event in the next 100 years or so.”

To carry out the study, Notsu and his team first teased through data from the Kepler Space Telescope, which spent the past decade looking for planets by monitoring how stars change in brightness over time. Working from a sample of about 90,000 Sun-like stars, the researchers identified more than 1,000 superflares from about 300 stars.

At first, they thought these stars would be rapidly rotating. That’s because quickly spinning stars tend to have strong magnetic fields that easily get tangled up, which is thought to kick off flares. But a fast spin is apparently not a requirement for strong eruptions. By bolstering their brightness data with size estimates from the Gaia satellite, the researchers were able to determine how fast their flaring stars were spinning. They found that, as expected, stars that rotate once every few days had superflares about 20 times as powerful as more slowly spinning stars like the Sun, which rotates about once every 25 days. However, Sun-like stars were still seen producing hazardous superflares.

The confirmation that slowly rotating, Sun-like stars can still throw out powerful superflares is surely intriguing, but it’s also a bit nerve-wracking.

“When our Sun was young, it was very active because it rotated very fast and probably generated more powerful flares,” said Notsu. “But we didn’t know if such large flares occur on the modern Sun with very low frequency.”

There is one historical point of reference, though. In September 1859, a solar flare sent a wave of charged particles washing over our planet. It triggered one of the most powerful geomagnetic storms ever recorded: the Carrington Event. As the particles slammed into Earth’s protective magnetic field, they triggered beautiful aurorae that stretched as far south as Hawaii and Cuba. But the Carrington Event didn’t just produce pretty lights in the sky. It also wreaked havoc on telegraph networks spread across North America and Europe. In fact, there are reports of the cosmically overcharged telegraph lines starting fires and shocking telegraph operators during the event.

If a moderate flare like the Carrington Event notably disrupted electronic systems in the mid-1800s, what would a superflare some 100 times stronger do today?

“If a superflare occurred 1,000 years ago, it was probably no big problem. People may have seen a large aurora,” Notsu said. “Now, it’s a much bigger problem because of our electronics.”

How big that problem will be is yet to be determined. “More accurate evaluations of the effects of superflares is a next urgent task,” Notsu told Astronomy, “but we can now expect things such as large-scale blackouts, satellite communication failure, and strong radiation in space,” which can do serious damage to instruments and astronauts alike.

To prepare ourselves for what may be an inevitable strike by a superflare, Notsu says we need to work on protecting our electronics by investing in radiation shielding and backup systems.

“This topic should [start to be considered] seriously from now on,” Notsu stressed.